A Road Trip of A Lifetime : The Great Ocean Road 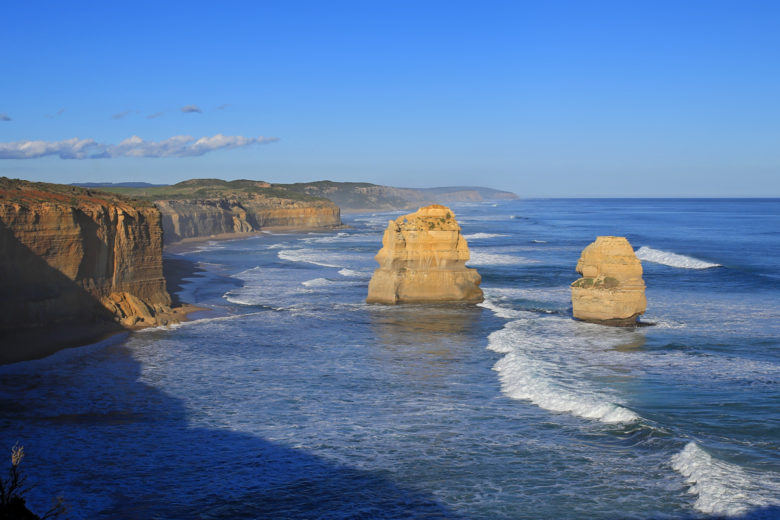 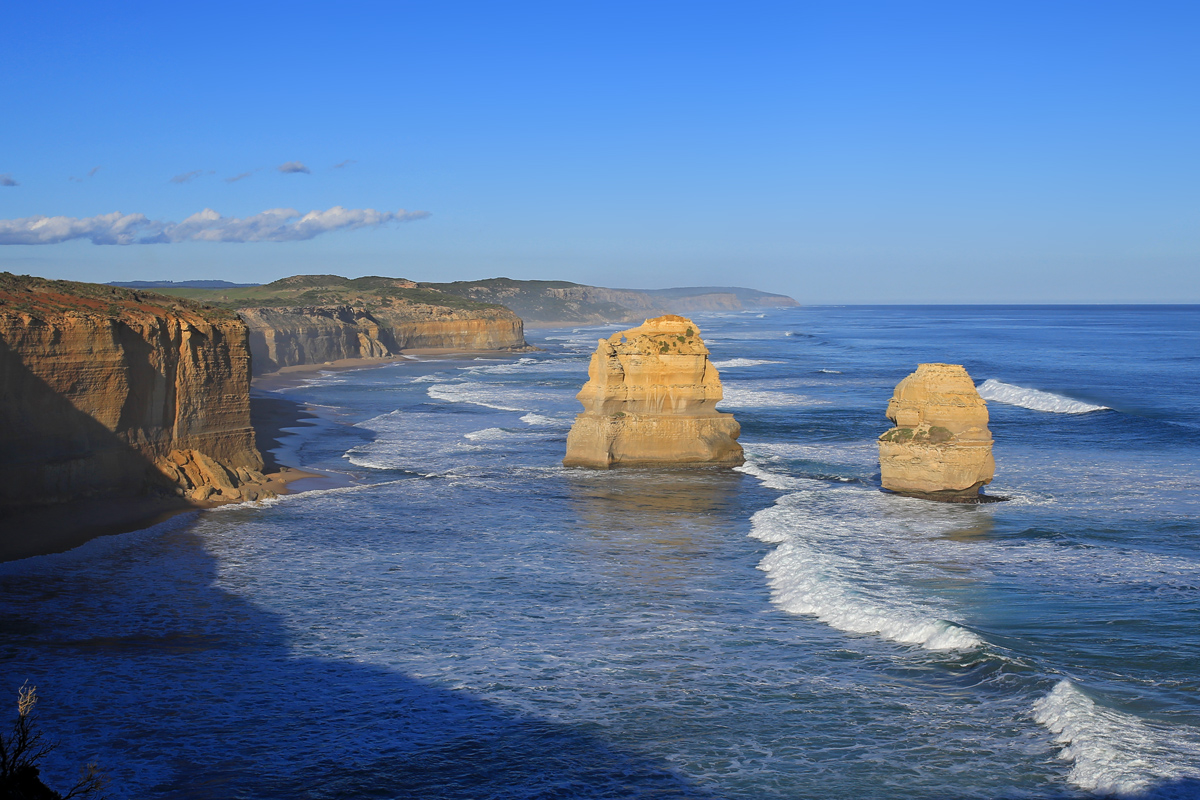 It is said driving is the best way to experience Australia’s magnificent beauty. Whether oceanic or outback, road trip in Australia will always be an unforgettable experience.

We couldn’t agree more. Road trip was on top of our priority things to do while in Australia. So we chose Melbourne as the first entrance point to Australia. Not only the city is one of world’s most livable place to live in, it is also the closest point to world famous scenic route, the Great Ocean Road.

We preferred renting a car than joining any tour to have more freedom in choosing which place to stop. There were some places that we preferred to stop: Bells Beach, Anglesea, Cape Otway and finally the world’s famous Twelve Apostles where we would spend time most of the time. Then Loch Ard Gorge and a night stop in Warrnambool. Taking rest after a long drive was so compelling for both of us. The next day would be another adventure.

So we rode a red 4x4WD on the first day of winter in Australia. It was a dark foggy morning when we hit M1 highway at 0630 am. The GPS kept reminding security camera ahead more than direction. I heard “security camera 100 metres ahead” repeatedly from the GPS. The law-abiding Japanese husband at front passenger seat also kept making the same reminder of the security camera. “Security camera ahead” became a frequent song in my ears for the next hours of drive. The road was busy nearly crowded with trucks and cars. The fog was getting thicker as we drove further. The fog light didn’t help that much when visibility got below 10 metres. It was beam light most of the drive. The road started getting more quietly after driving nearly an hour, the morning was still as dark as midnight.

The sky behind us turned orange, sun was rising. The view behind us was strikingly beautiful like we never seen before. The fog that we despised before turned out to be the important element of a dramatic sunrise. We felt in love to Australia’s countryside before we even reached our first destination. The next several hours of driving were one of the most memorable trips we ever made together. 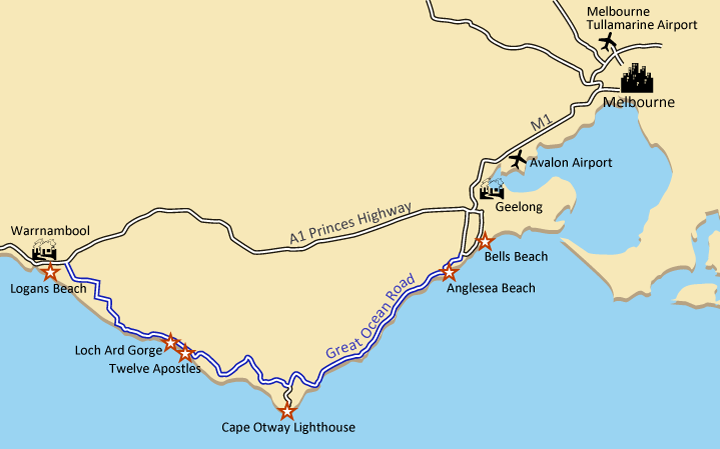 The fog was completely gone by the time we reached Bells Beach. It was deadly quiet at the beach. The sound of waves welcomed us as we got to the observation deck. Sky was stunningly orange as the sun started rising. 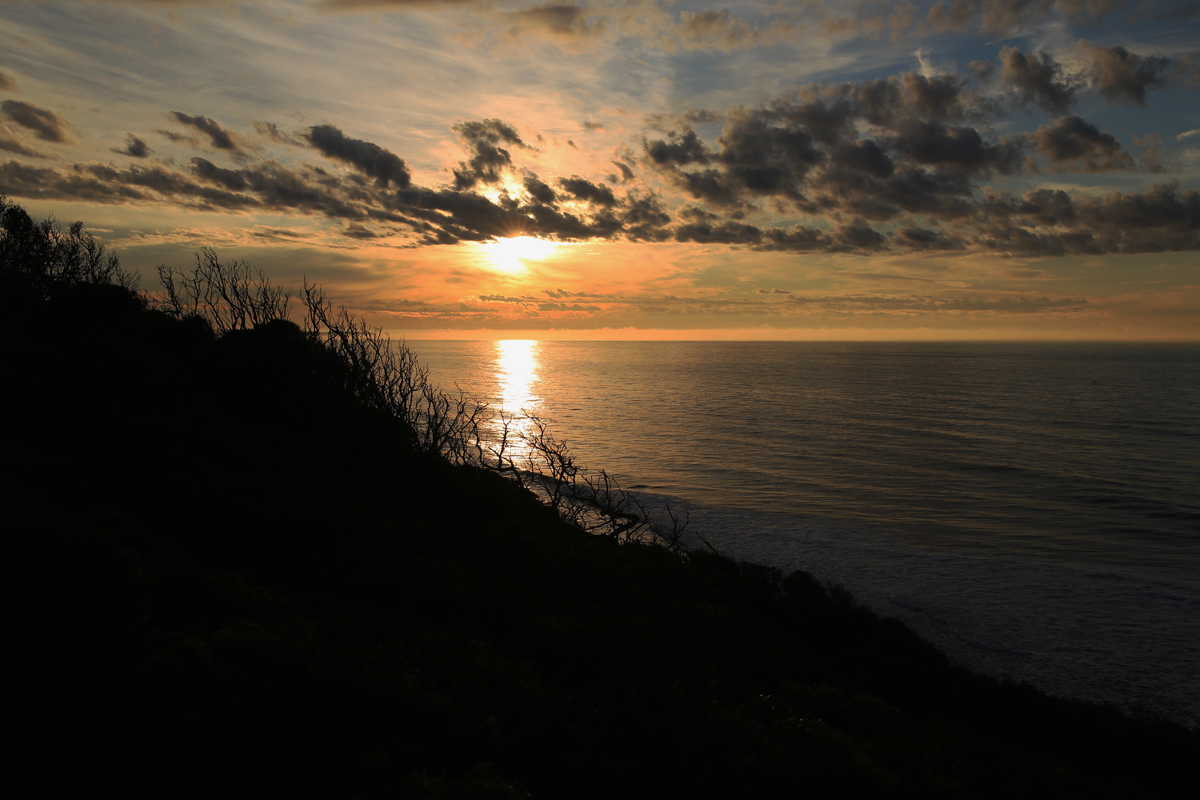 Then it was suddenly bright yet still quiet. Bells beach was forgotten on the first day of winter. 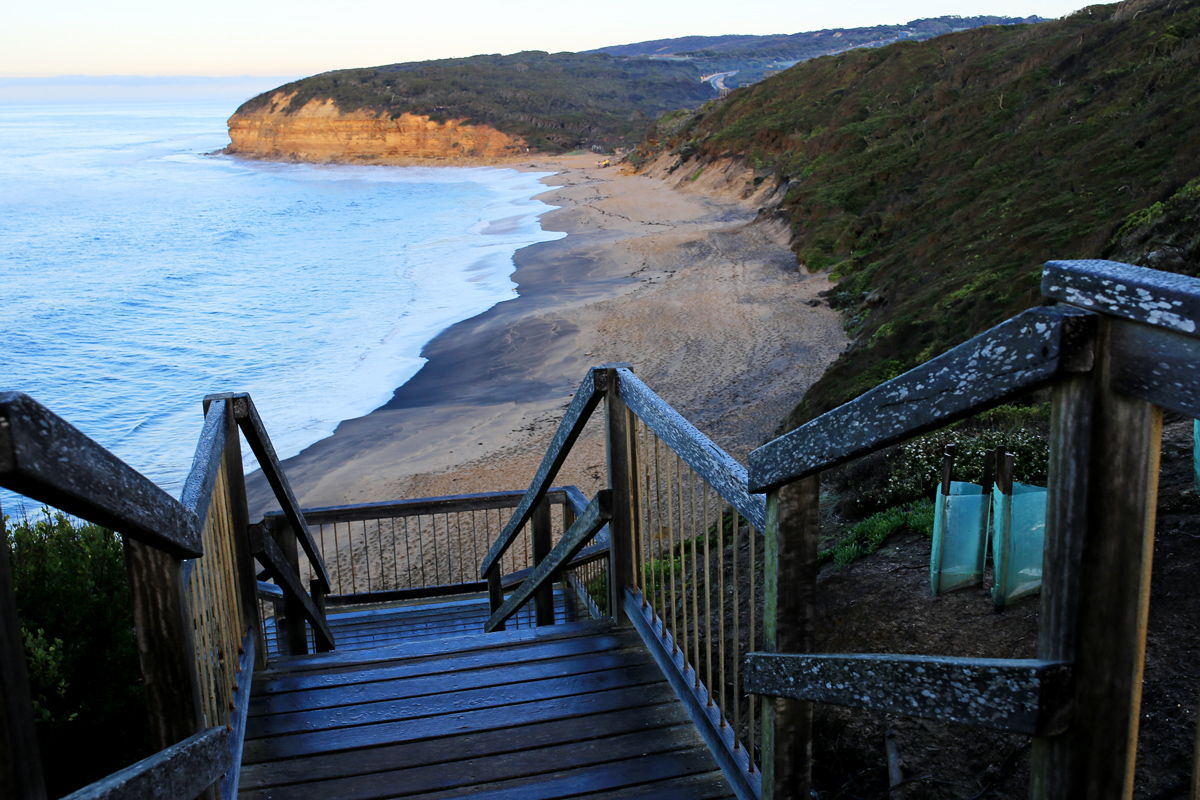 Our breakfast stop at Anglesea turned to a disappointment. The cafe facing the beach would open only on Thursday to Sunday. We came on Wednesday, too early for the cafe.

A home to surfers was more lively compare to Bells Beach. Surfers were already on their way chasing waves. The waves here were bigger than Bells Beach. We only spent less around 15 minutes at Anglesea Beach. And our morning went by without caffeine boost. 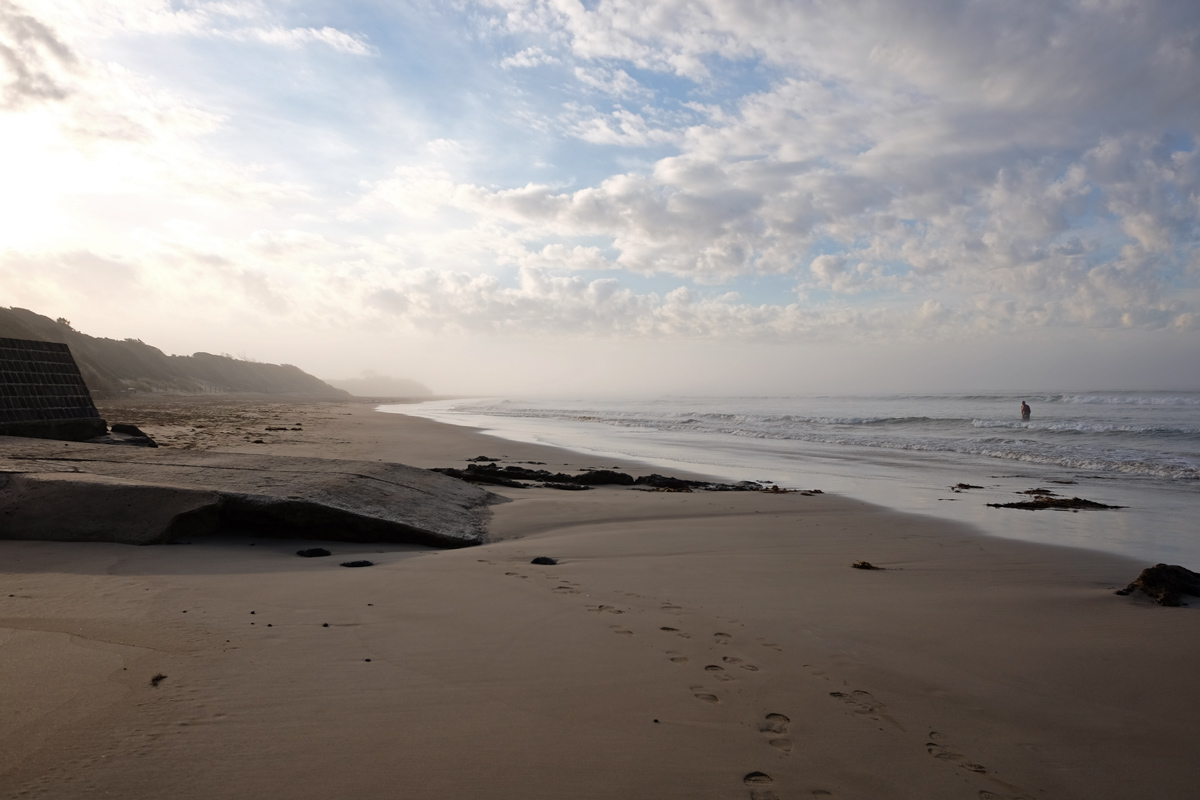 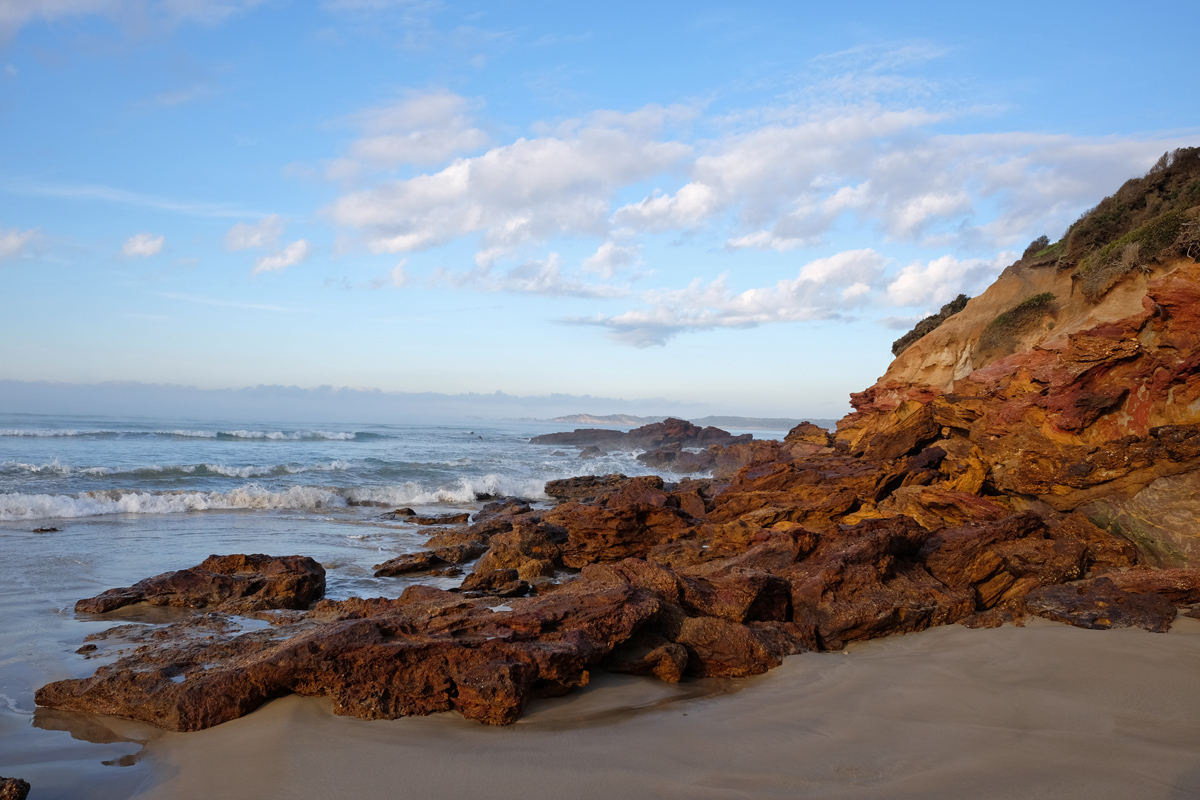 The scenic route started after the Anglesea. The view was nothing but magnificent. We were blessed by great weather. 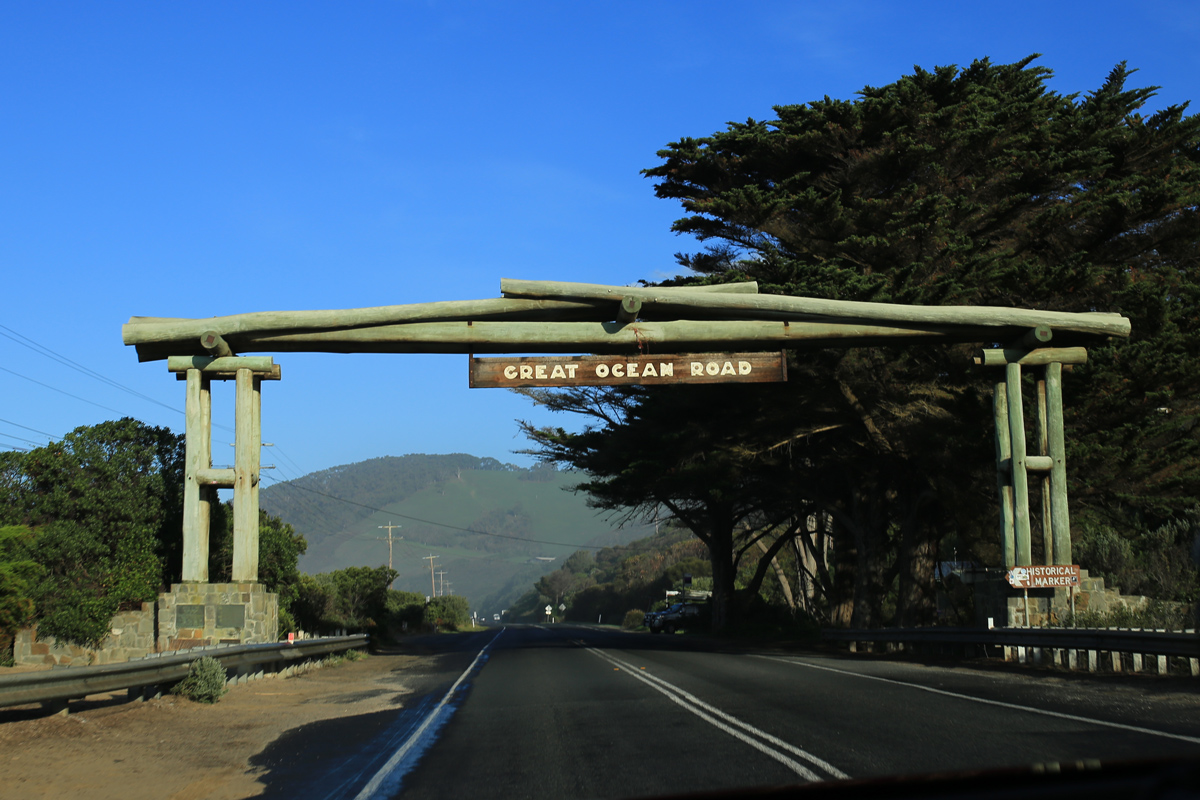 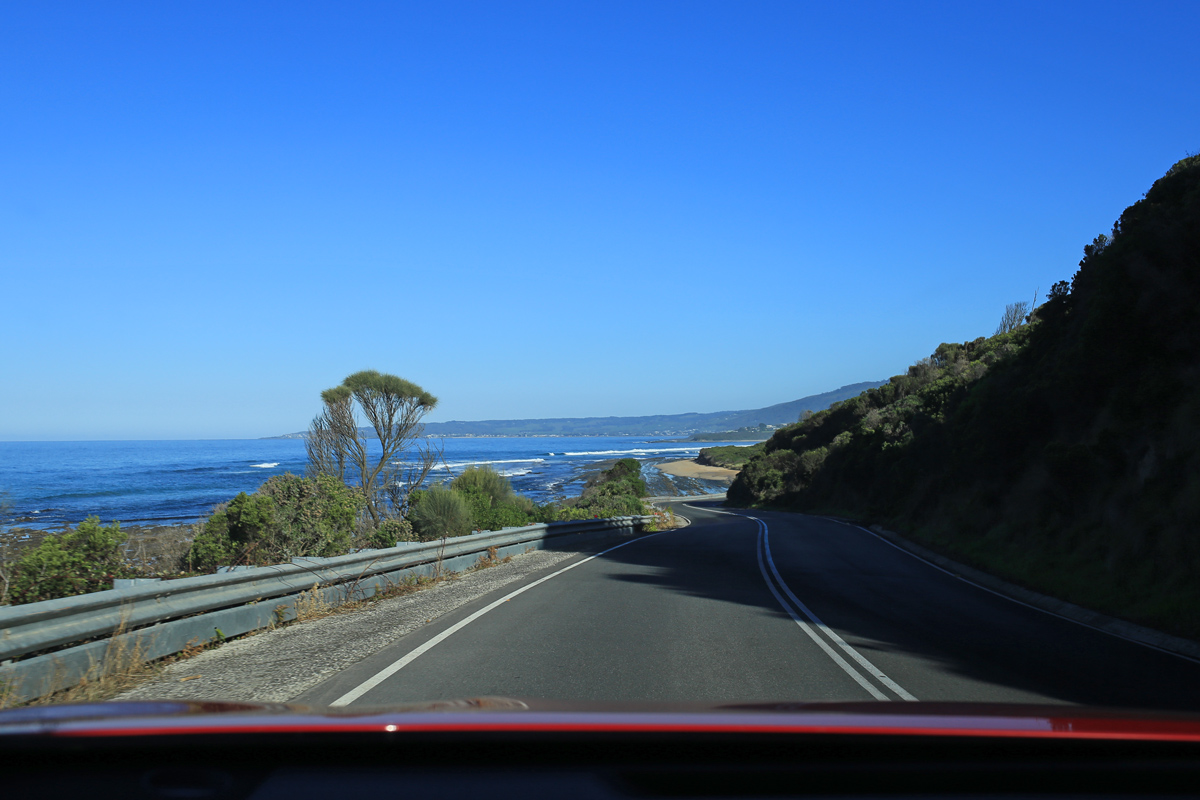 We made a quick stop from time to time to stretch our legs and pictures taking. There is always a road shoulder the Great Ocean Road. 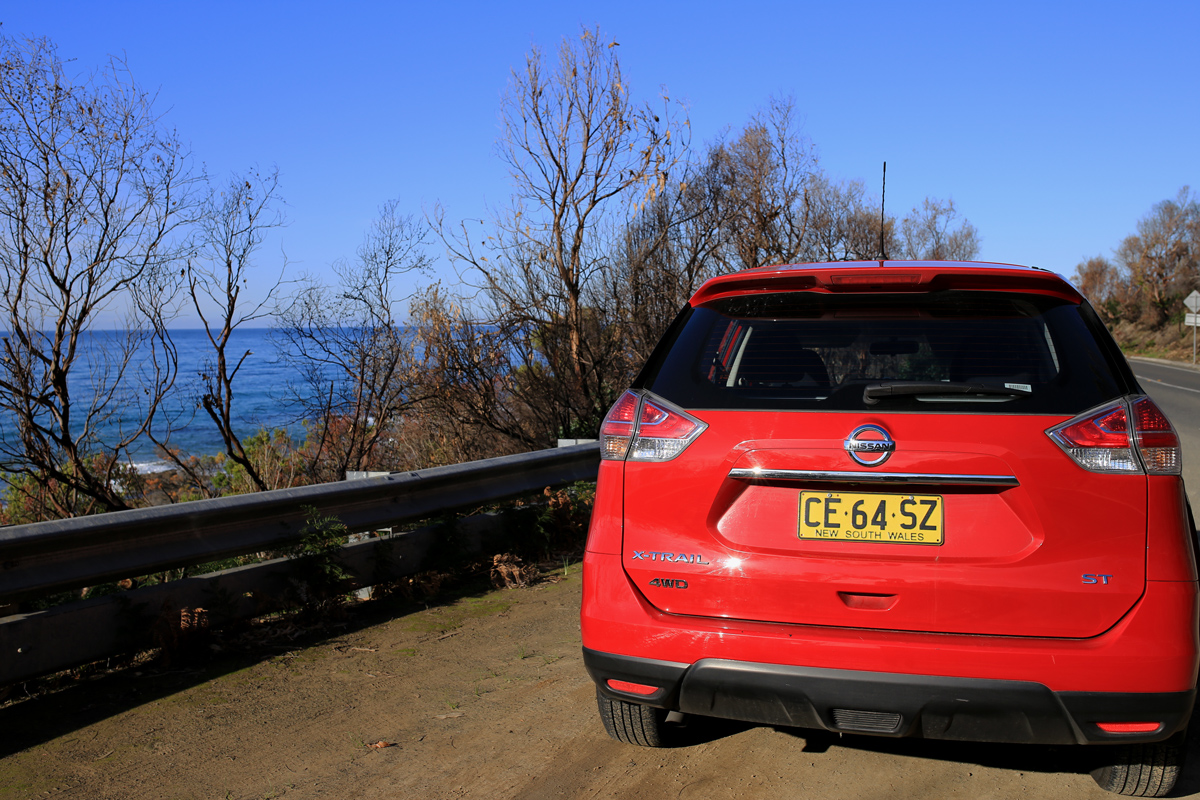 It took us around 30 minutes drive from the main Great Ocean Road to the Cape Otway Lighthouse.  The drive to the Cape Otway Lighthouse was a venture through a dense forest. The narrow road with curves challenged me to keep the speed limit to 50km/hour or even slower. I feared the car coming from the opposite direction. There was quite number of them.

We would voluntarily lost inside this dense forest. I was so compelled to pull aside if only I could find any road shoulder. The Cape Otway Lighthouse drive was worth a journey. 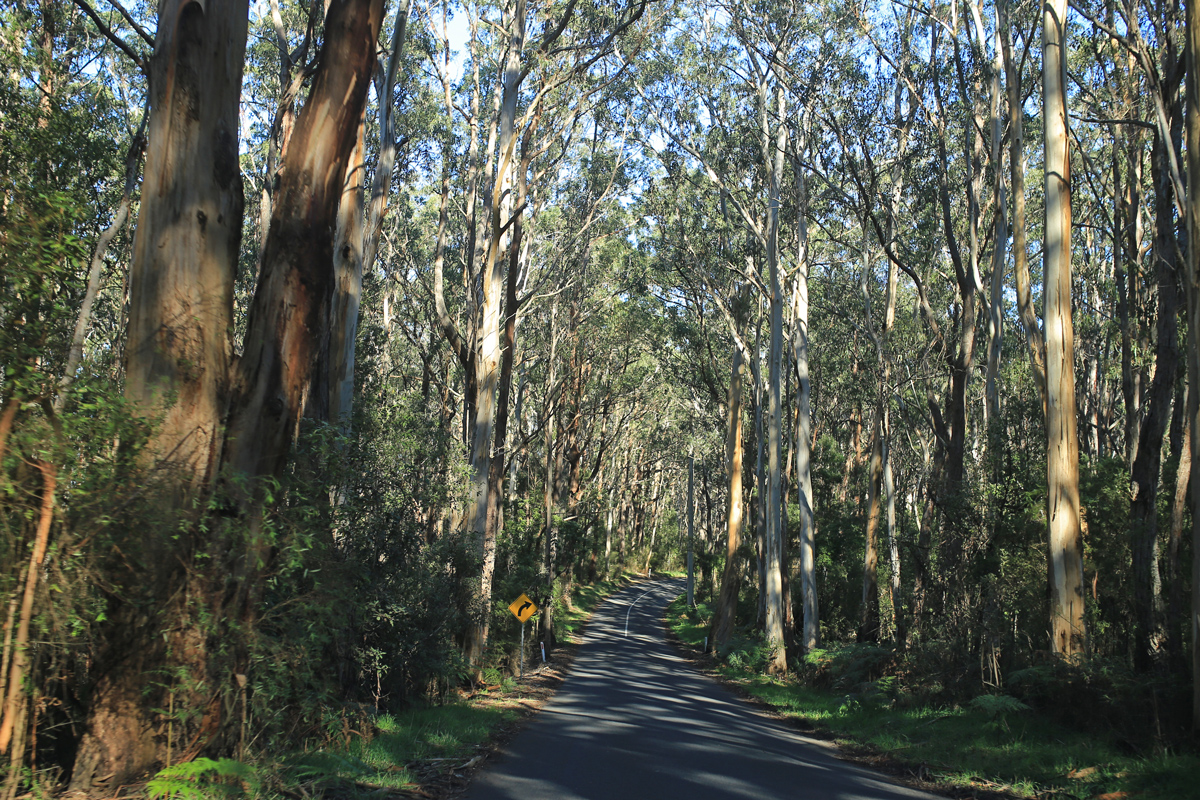 The Lighthouse is one Great Ocean Road’s scenic spot obviously for strong reasons. Not only that the Cape Otway Lighthouse is the oldest surviving lighthouse in Australia, it also offers spectacular ocean view from its observation deck. It is said that whales usually pass the ocean by mid of winter when Australia weather getting colder. There is a strong reason to revisit Cape Otway in the future. 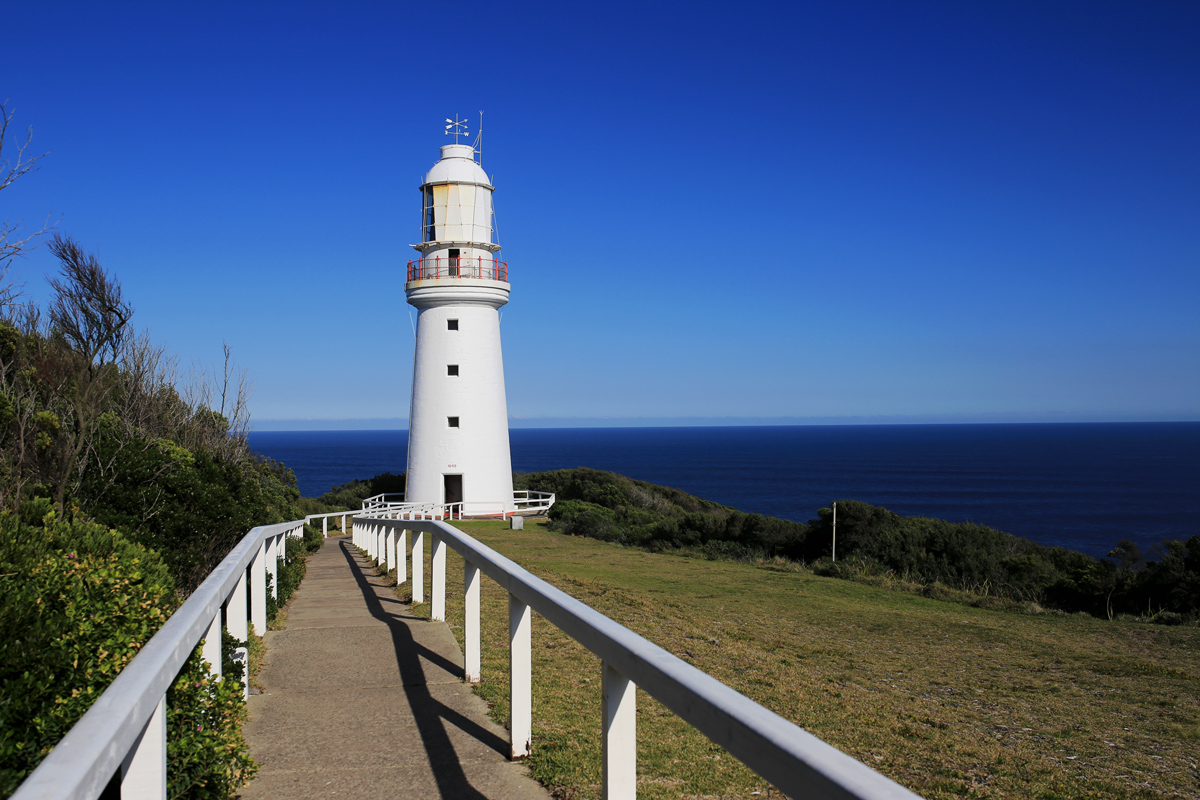 We spent more time to grab lunch and coffee in Cape Otway. Surprisingly, we could get a tasty vegetarian burger and good latte at the cafe near to the lighthouse. There’s no better time to enjoy the food than at empty stomach. We were in no rush finishing the latte, enjoyed it to the very last sip. An hour and half gone by quickly then we hit the road again after fully caffeinated. 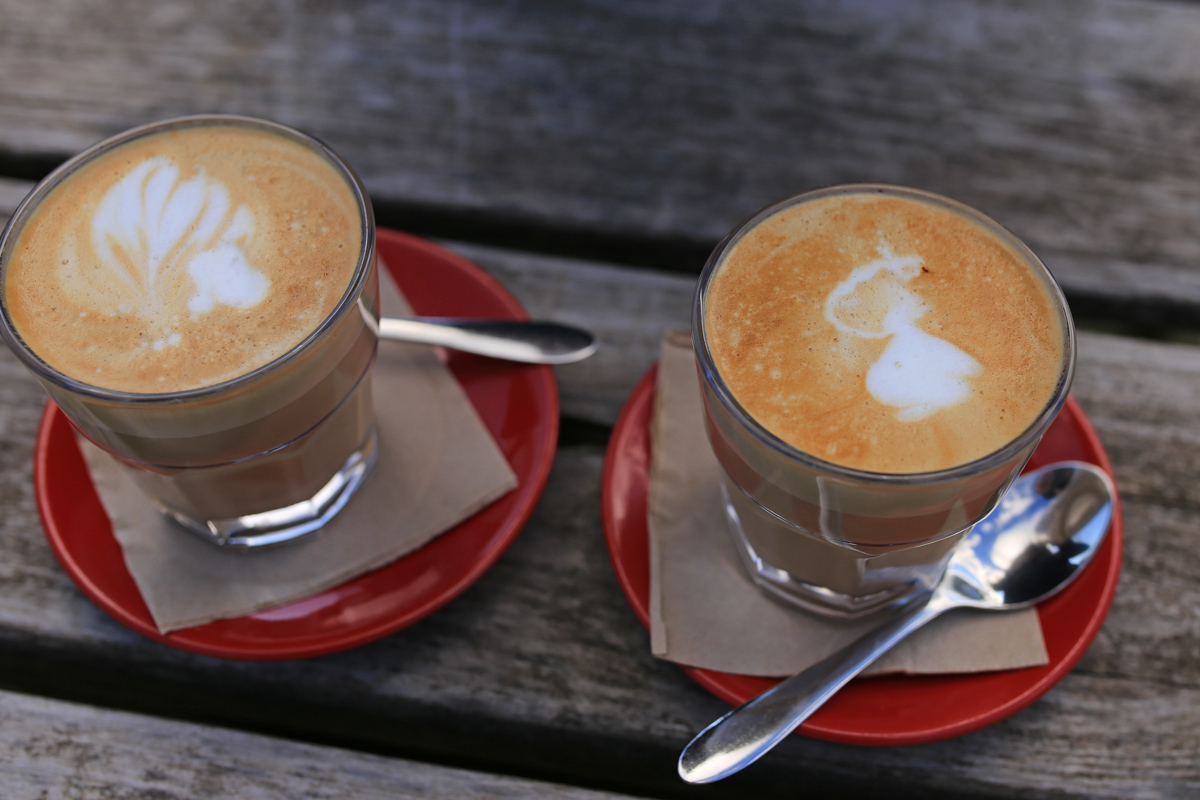 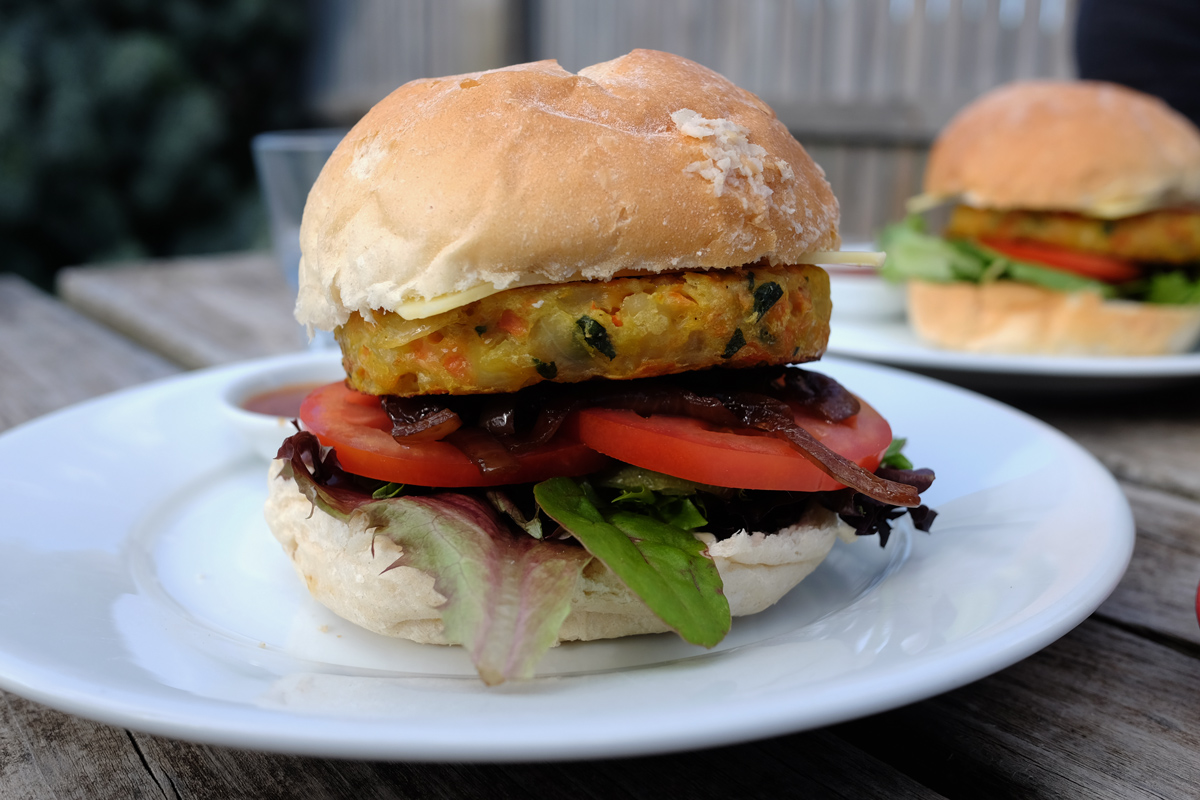 After driving for nearly one and half hours we finally arrived at Twelve Apostles, the most famous Great Ocean Road scenic spot. Unlike places we stopped before, the Twelve Apostles were crowded by the time we arrived at almost 3 pm. The parking space was full of cars, caravans and buses. People were everywhere. It was easy to tell that how famous the Twelve Apostles was this day by judging from the number of visitors alone.

The Twelve Apostles view deck was swarmed with people taking pictures and did snapchat  (never left the spot before the snapchat ended). 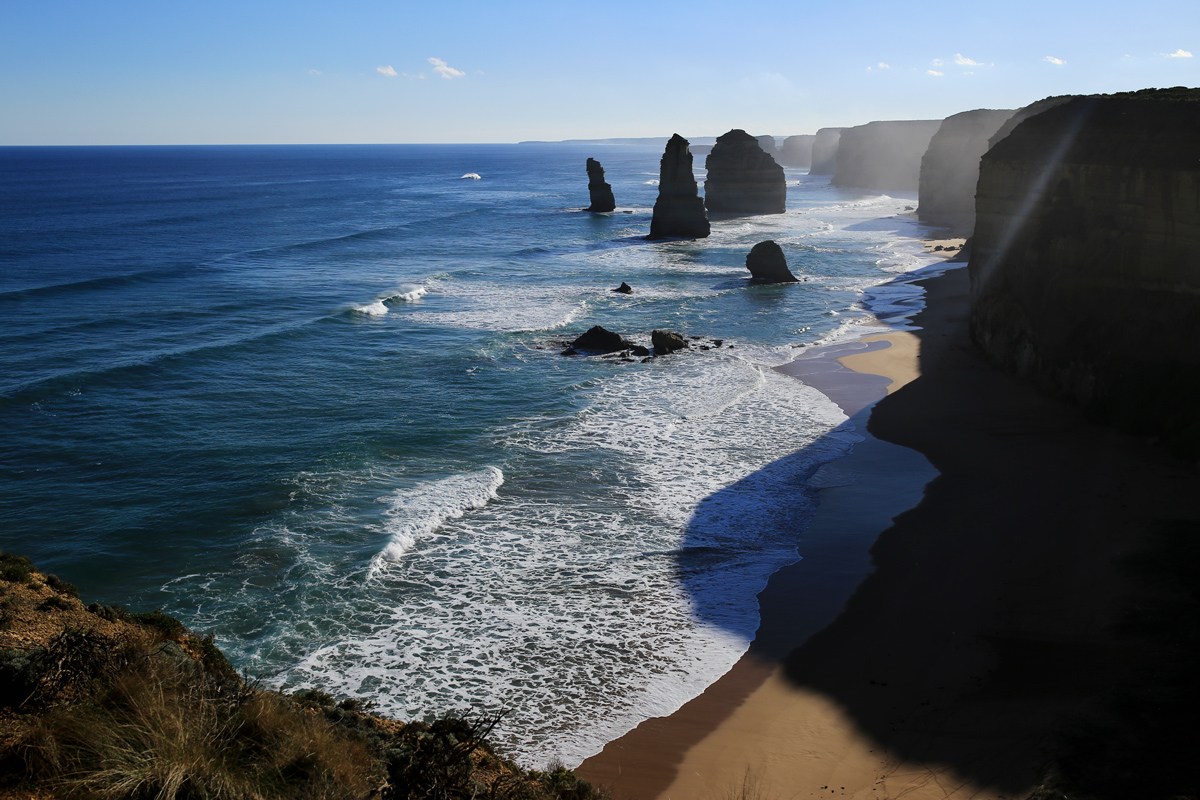 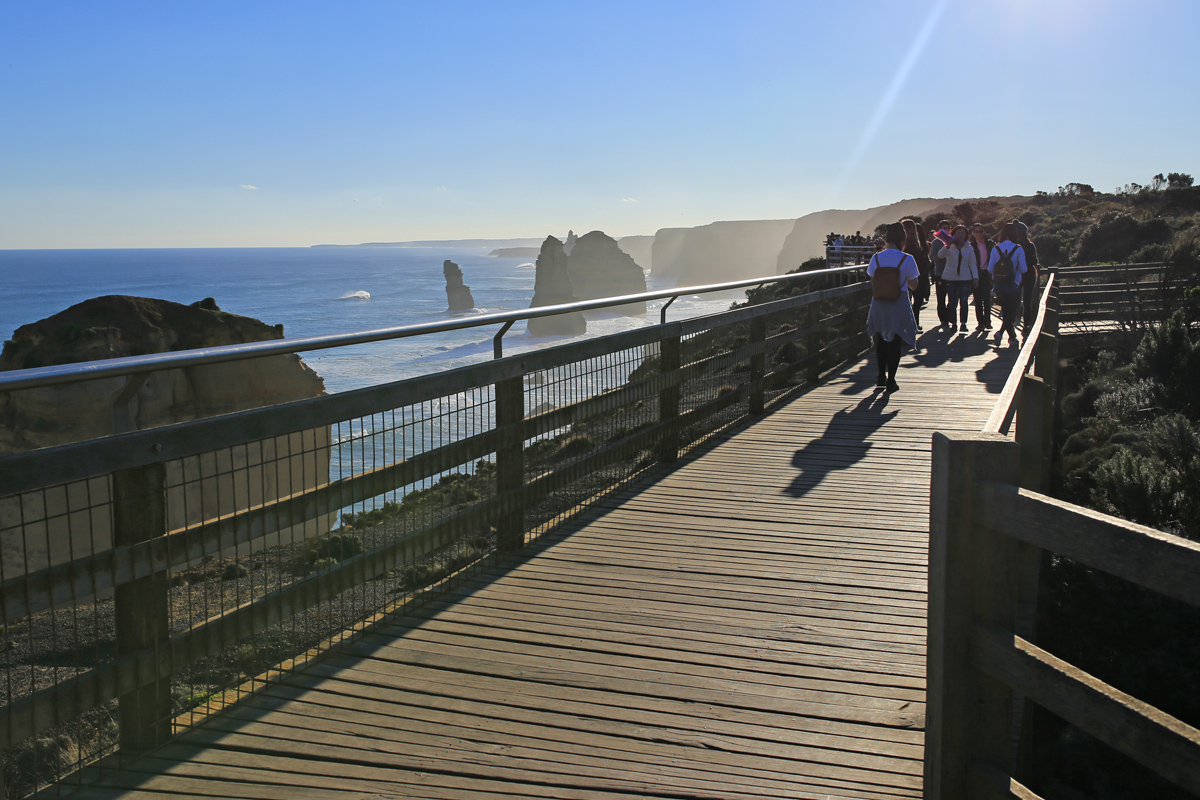 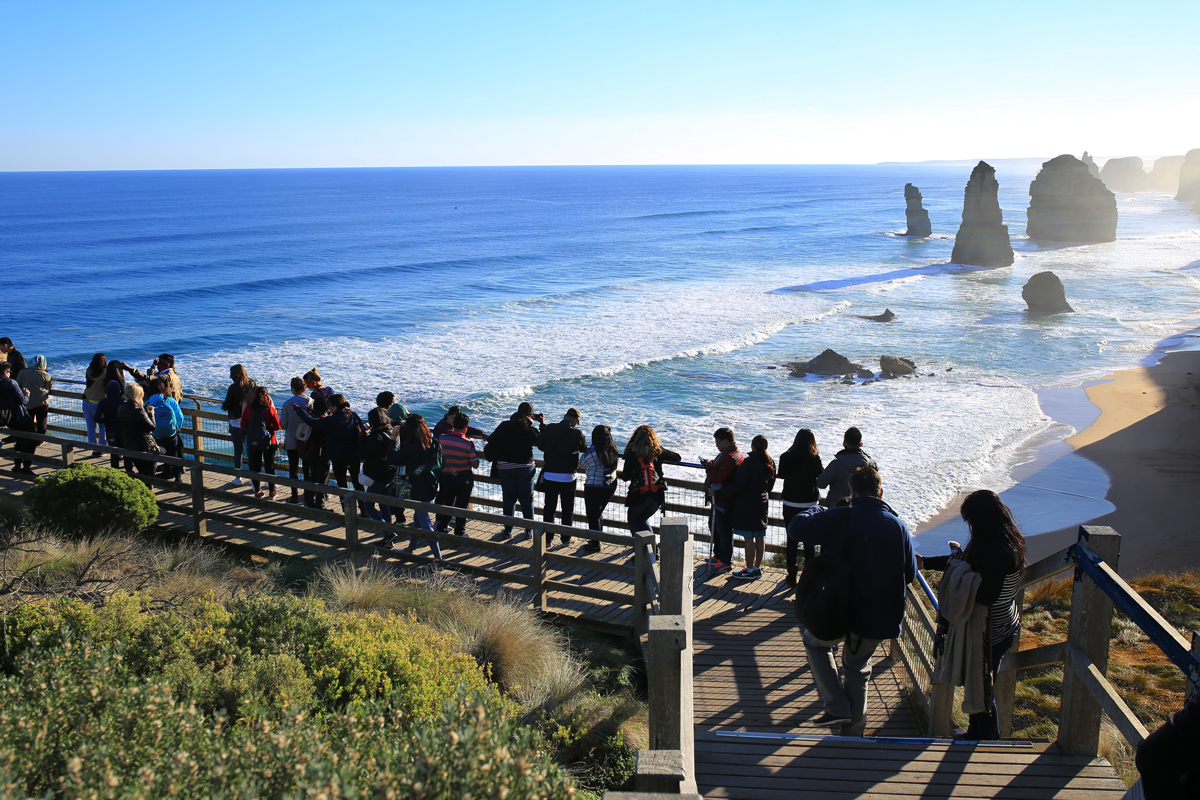 It took us 10 minutes drive from the Twelve Apostle to Loch Ard Gorge beach. We only chose Loch Ard Gorge Lookout for a stop and skipped other trails (Loch Ard Wreck Site, Island Archway and Thunder Cave) because of the time constraint. We wanted to visit Logans Beach before losing the sun.

The Loch Ard Gorge waves deceiving tourists, thinking it was save to stay as close as possible to the beach. Then a big wave hit the shore and all nearby feet turned wet. None cursed the ocean delivering big waves. Everyone was laughing as happy as children finding a new toy. It was one fine winter afternoon at Loch Ard Gorge. 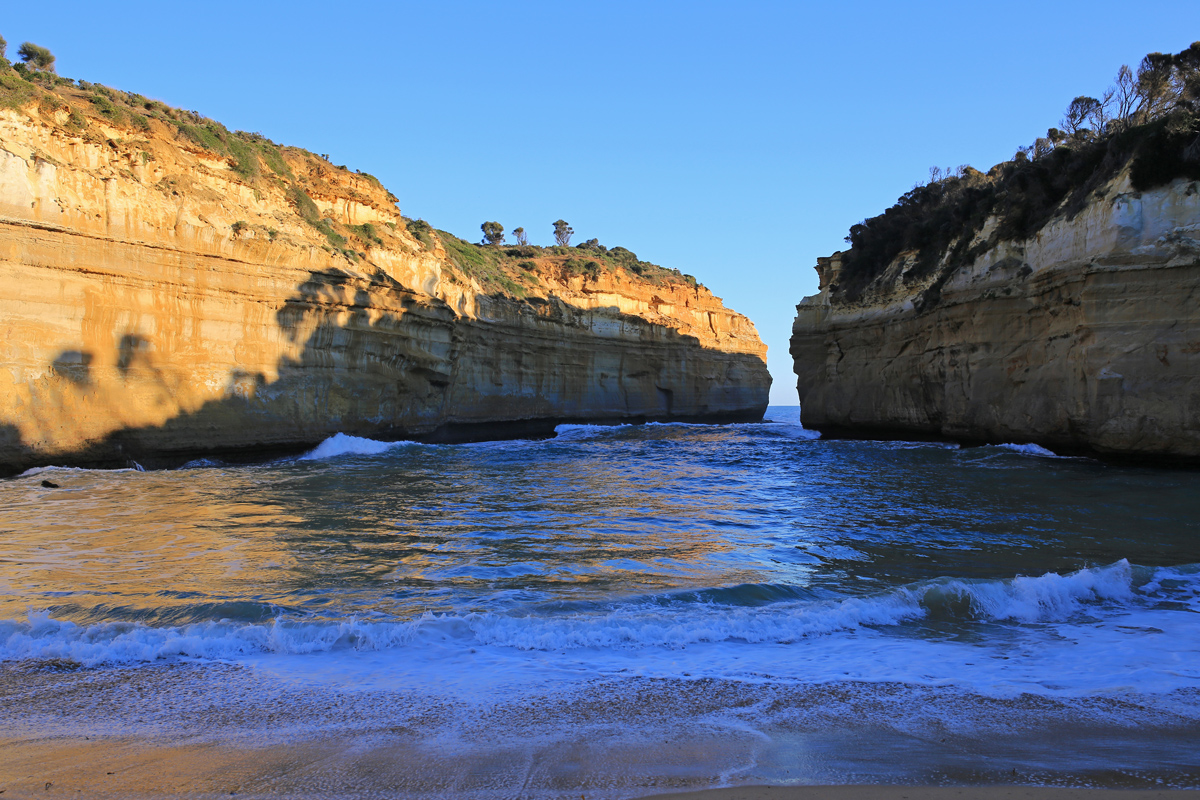 It was not easy to allocate Logans Beach Whale Watching Platform. We could not find the beach easily. If not because of some surfers walking to its parking space, we would had missed the beach.

The famous beach for whale watching was quiet at sunset. None but surfers reaching the shore as the night felt quickly. Temperature dropped, wind became chill when we reached the observation deck. We missed the sunset. The whales had yet passed the area, still swimming far away in the ocean. Later we found out that the whales passed the area between late July to August. We gotta visit this place again someday. 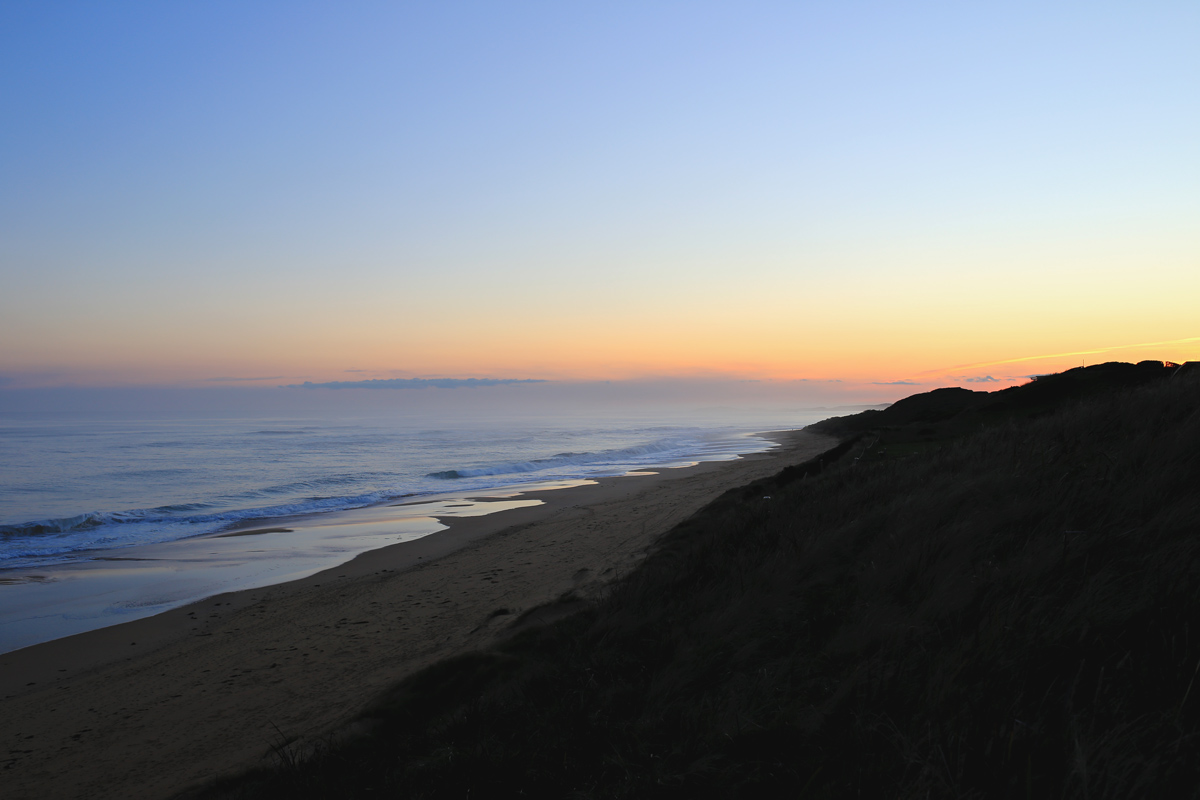 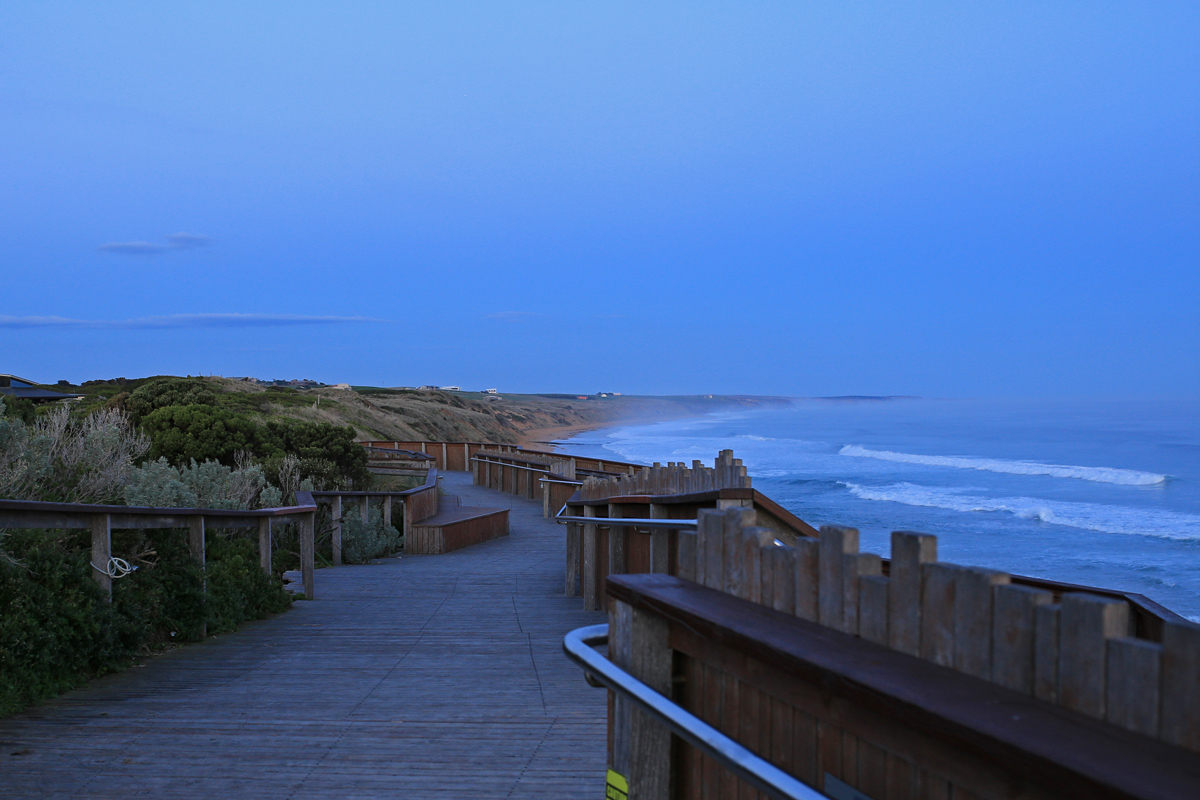 We then headed to our hotel in Warrnambool. There was not much view to be seen from the room as it was already dark. The next morning we would also miss the beach near the hotel as we departed before the dawn.

Driving duration from Warrnambool to Melbourne Tullamarine Airport: 4 hours (via A1 Highway)

Morning was still as dark and foggy by the time we left the hotel at 0630.  It would be a long drive straight to Melbourne Airport. Thick fog blanketed the road slowly gone after we drove an hour.  Half of the road was unsealed. The road was ours for hours to come. It was eerily quiet. I was grateful for having someone I loved sitting next to me for this entire trip. 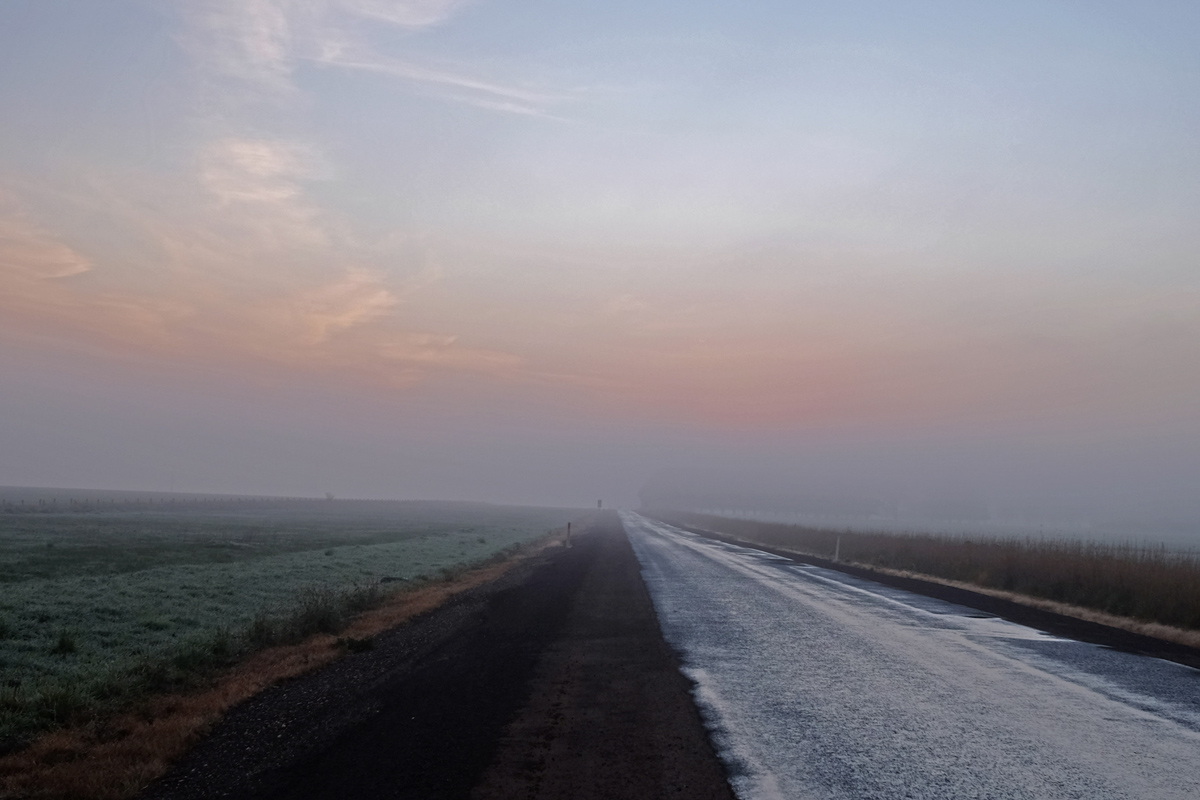 None alerted us before that Australia’s countryside was spectacular. We could not resist to pull aside from time to time, emerged ourselves in admiration for a picturesque countryside.

We intentionally let ourselves lost in time when the sun rose. What was the essence of travel if not for appreciating the surrounding beauty. 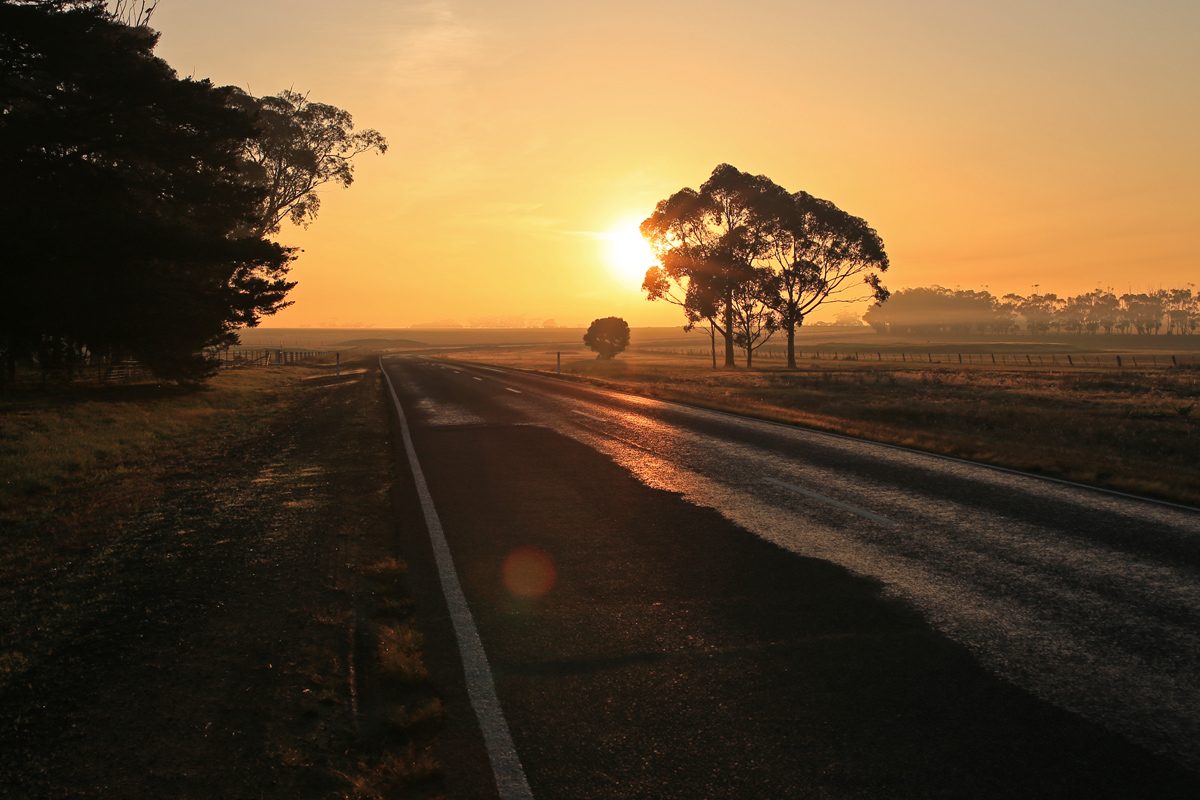 We stopped Geelong’s rest area at after nearly three hours drive for taking breakfast and fill in the tank. This rest area is part of the highway which made it easy for a stop. We spent an hour and half at the rest area before continue the trip. The road to the airport was crowded with cars and trucks and got even more crowded near the exit to all the way to the airport. After 4 hours of driving we finally arrived at car rental return station within the airport vicinity, safe and sound.

The Great Ocean Road trip was quite a journey.

Things to Know Before Driving the Great Ocean Road: