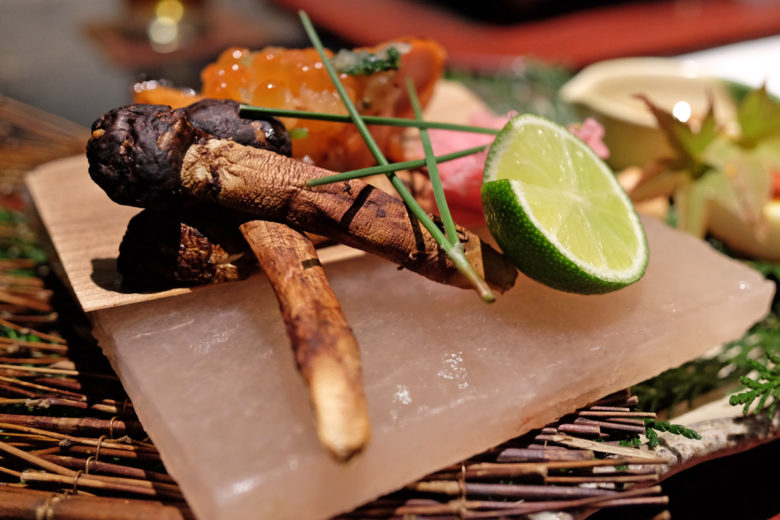 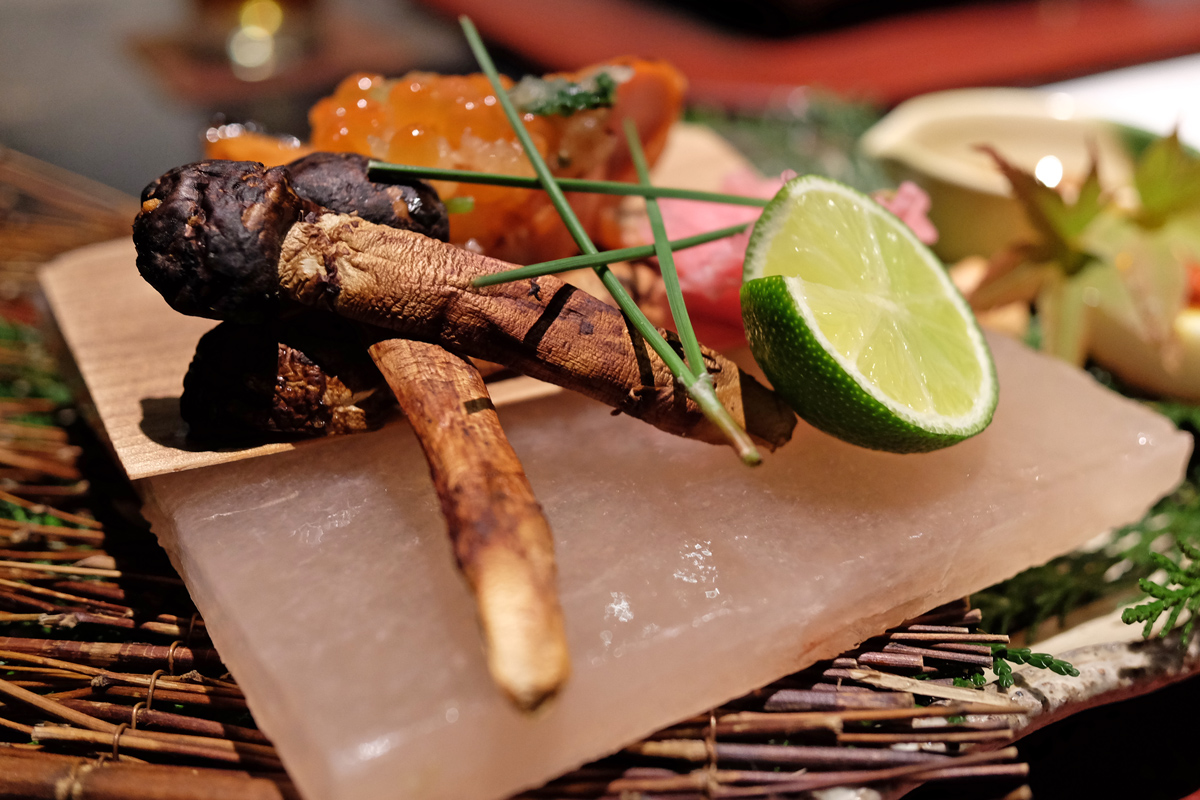 We are not the only ones who adjust to season change. Cuisine world too starts changing the menu on the day of autumn equinox. Summer dishes that incorporate cool element ingredients to calm down the body heat now has gone. Japanese restaurants start preparing autumn menu. When it comes to a fine and luxury dining, pumpkin is not the only autumnal menu.

One of autumn famous food in Japan is Matsutake mushroom. Matsutake mushroom has been part of Japanese’s cuisines for ages. It is believed that this particular mushroom has great benefit for health and longevity. Because of its benefit and high demand on Matsutake mushroom, the price increases steeply over the years. My family said Matsutake mushroom is not everyday dish anymore. Not only because of the price, it is also hard to find at the market. When my sister in law heard one of her favourite restaurants served Matsutake mushroom, she booked a table for three, called her brother and said “hey, I booked a table for us in the Marunouchi building. It’s Matsutake courses, so whatever going on with your day you gotta be there tomorrow at 0730pm”. Then Ikumo said to me, “whatever going on you gotta be at Tokyo station at 0715pm. We’ll have Matsutake for dinner at the courtesy of my sister”.  I initially did not have any idea how important this Matsutake musroom before. I know it’s expensive but then what. There are many expensive food but they do not necessarily live to the hype. I googled Matsutake in Japan’s cuisine then told myself I must be there at 0715pm.

So, there we were having a luxury dinner with “one-san” (sister) at the Kurayamizaka Miyashita. It was a eight-courses dinner started with a simple dish with Matsutake mushroom. We had a dedicated waitress attending our table who patiently introduced each menu including the best way to enjoy the food. The length of the menu looked slightly intimidating. 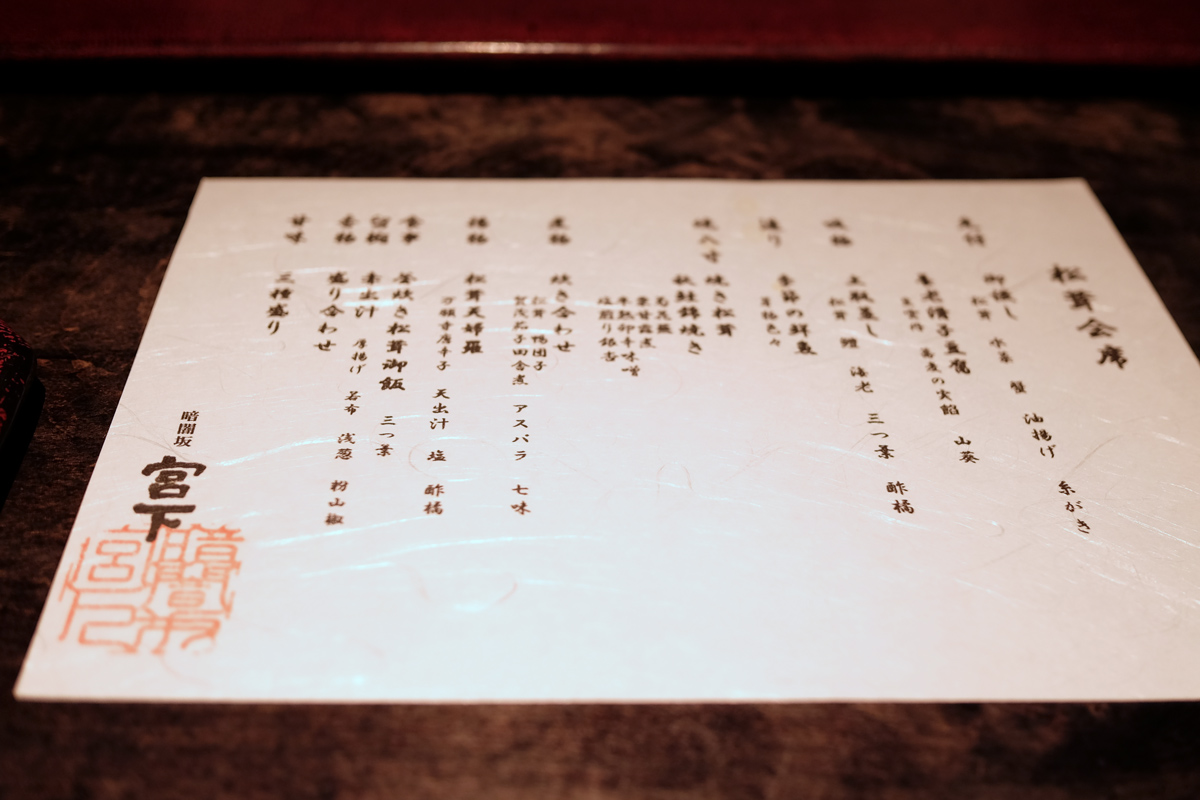 This starter might be small but it made me longing for more. 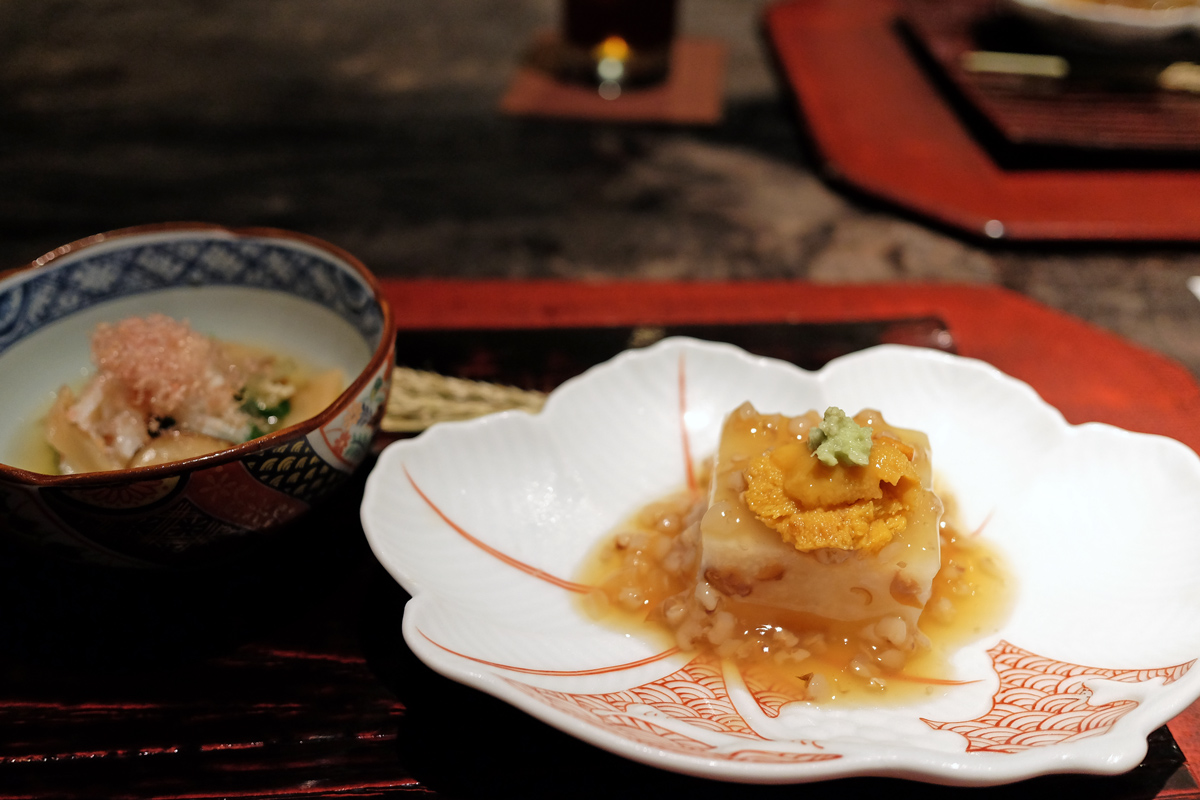 The second course was a typical autumnal dish: Matsutake mushroom soup served in a hot clay pot that looked like a tea pot. Apparently it was served like a tea except that you were not allowed to open the lid, as a matter of courtesy.  I thought it was merely because the pot was too hot to hold. 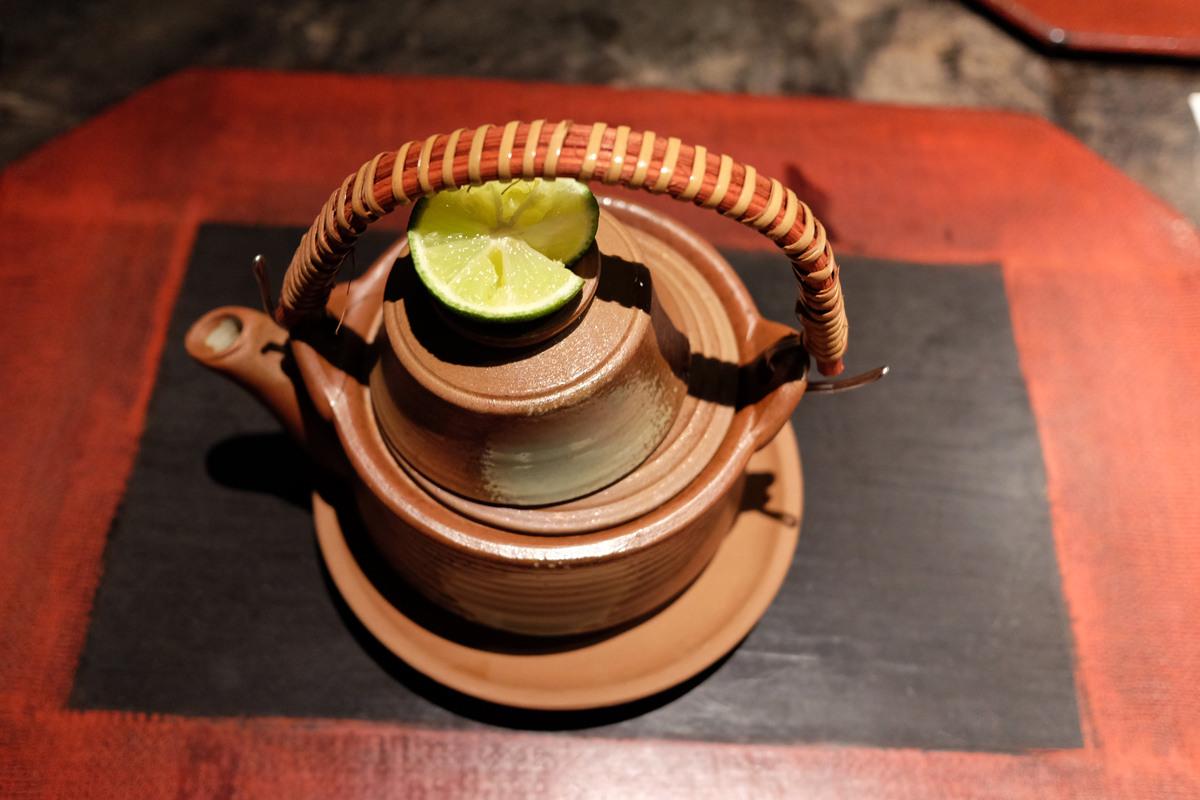 The Matsutake mushroom bathed in “dashi” (vegetable stock made from kelp and mushroom). First, poured the dashi into the cup, added in squeezed lime a little bit and enjoyed the soup until the last drop. The soup was fresh with nice fragrance of Matsutake mushroom. The pot temperature had cooled down by the time we finished the soup. Inside the pot was Matsutake mushroom, fish and green vegetable. 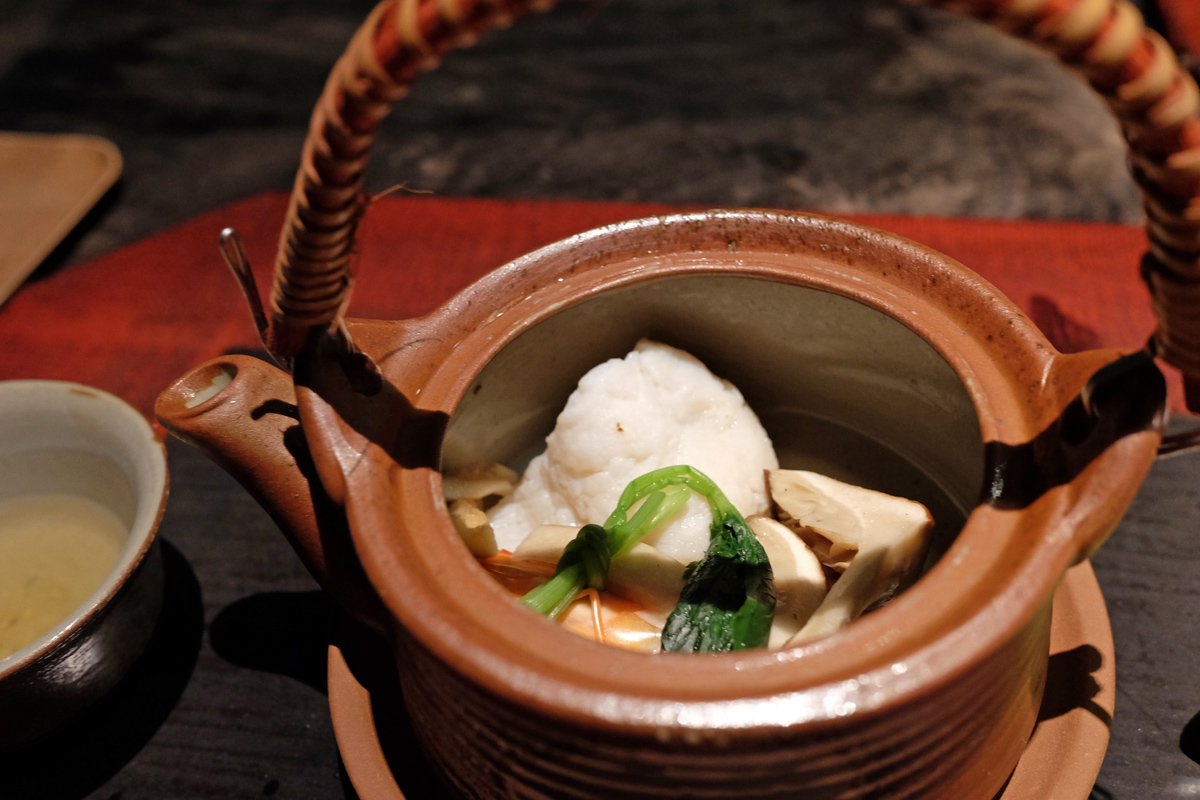 The third course was a set of sashimi. 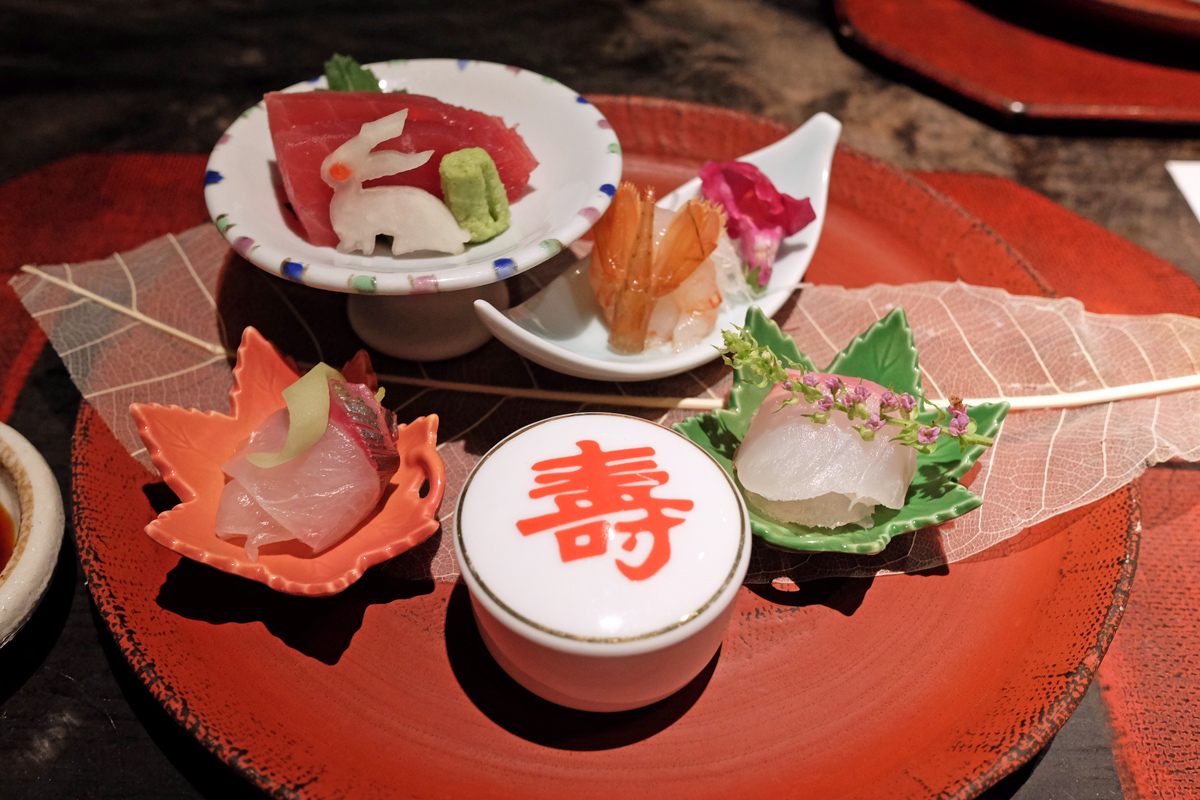 The fourth course was the highlight of the dinner: grilled Matsutke mushroom, salmon, roe, boiled egg, chestnut and ginkgo. It was  an art on the plate. It was nothing but perfection to the eyes.  The grilled Matsutake mushroom tasted absolutely outstanding. It had great aroma, tasted earthy without being mushy with a little bit of cinnamon spicy taste. 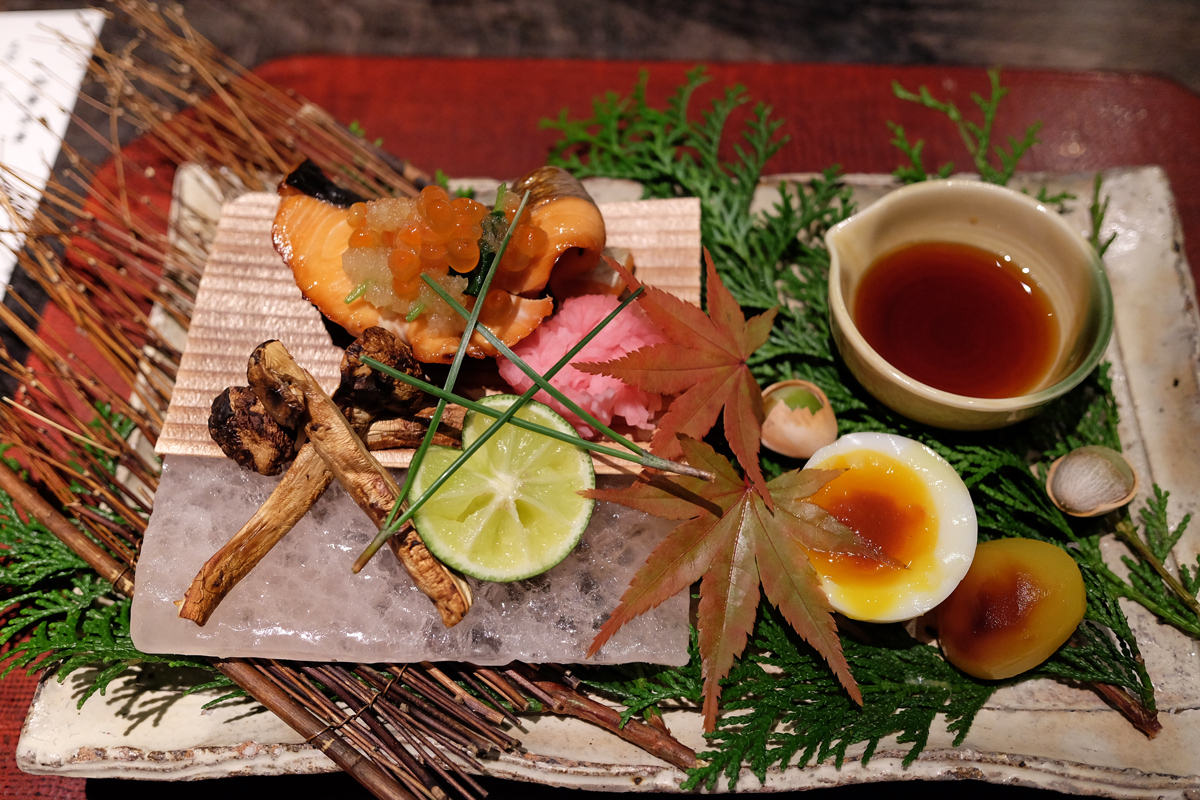 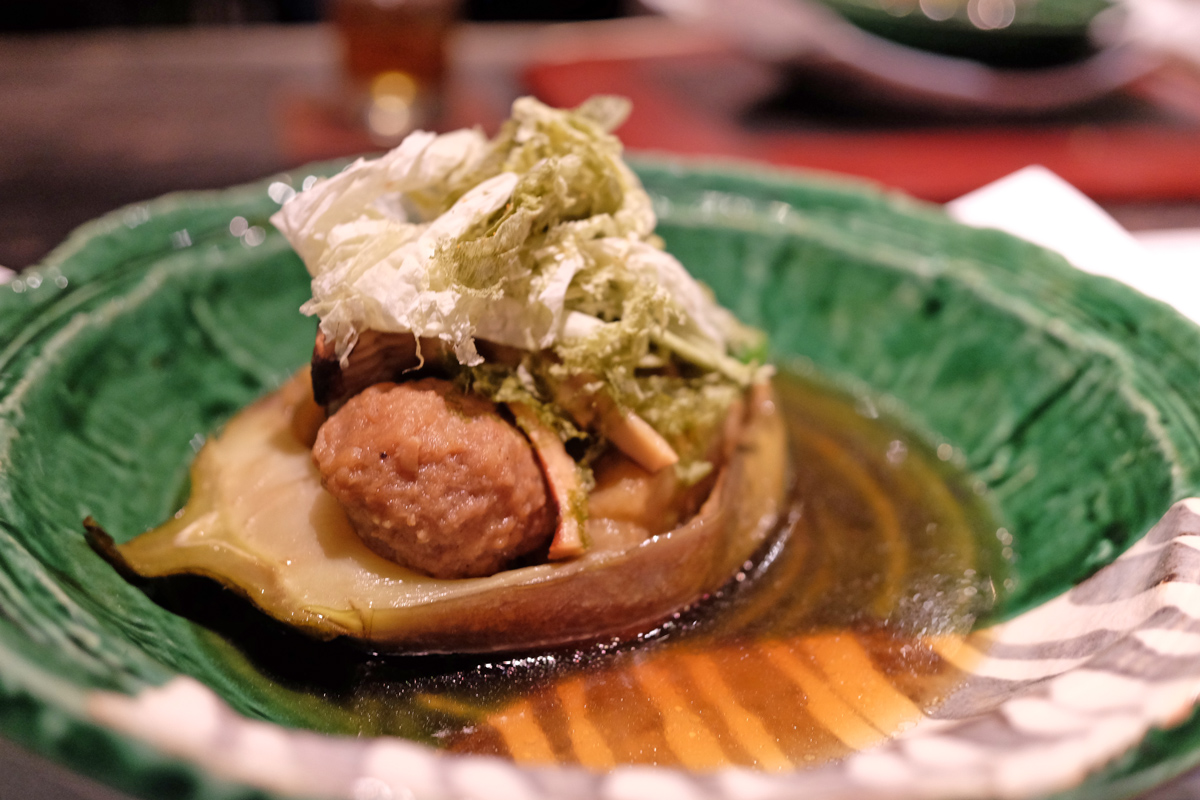 The sixth course was Matsutake mushroom tempura with green paprika. 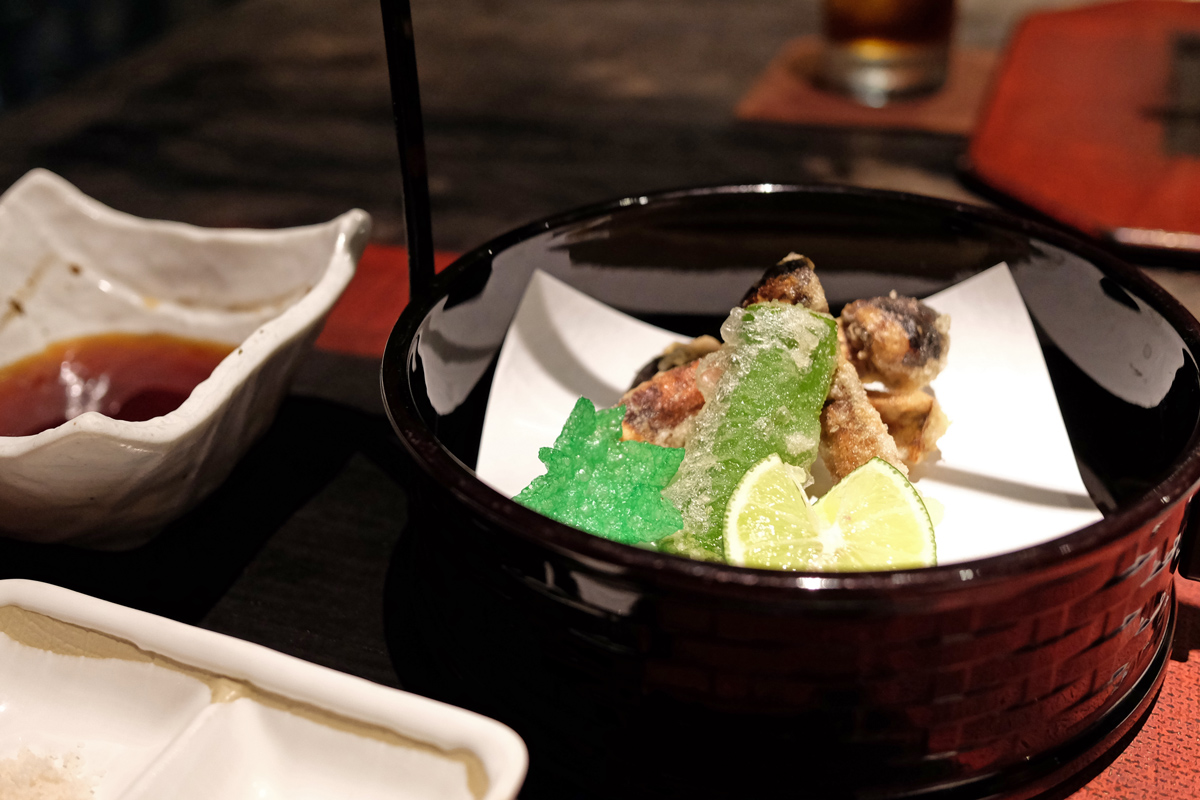 Finally came the rice. It was Matsutake rice and miso soup with red radish pickle, cucumber and raw squid.  I initially thought the Matsutake would became too soft and looked slight unappealing in the rice. The Matsutake mushroom still had its crisp and smell surprisingly. The rice got its fragrance from the Matsutake. This set was the seventh, eight and ninth courses served altogether. 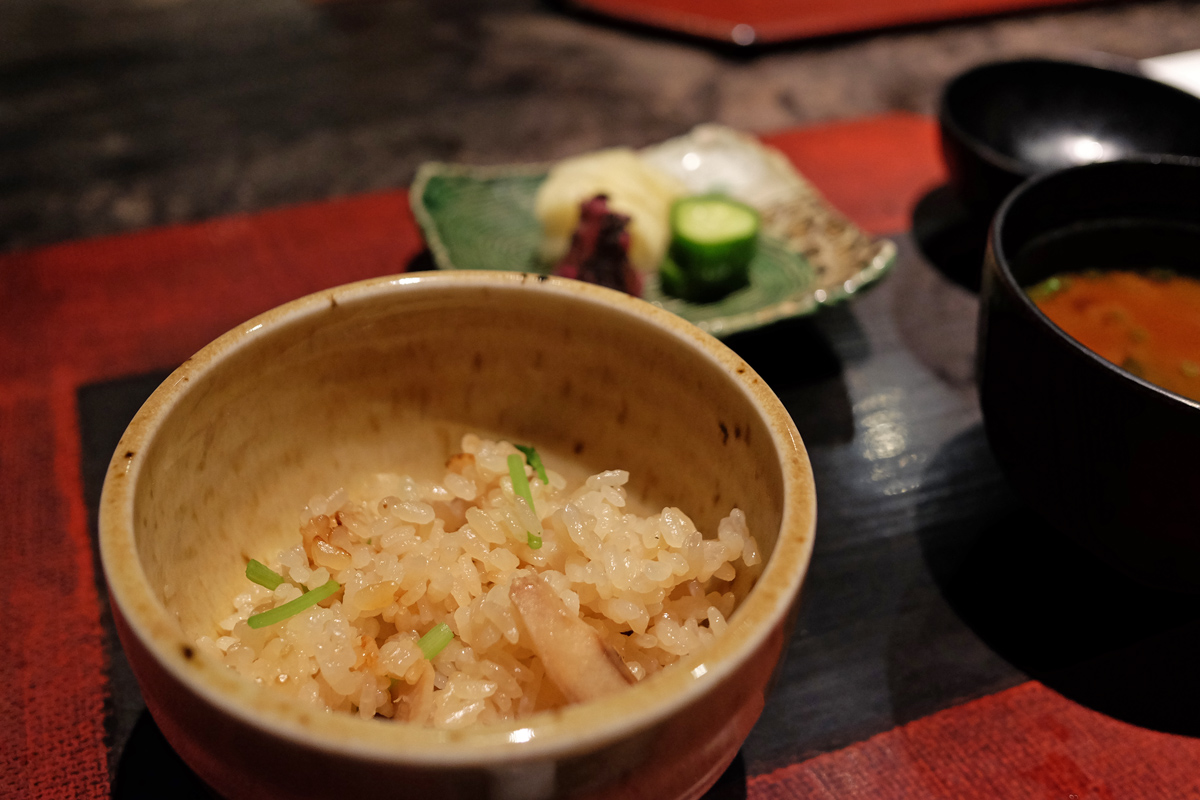 The dessert came in a set: grape ice cream, sesame seed paste, mochi and pear. I did not take picture of mochi (glutinous cake) being too overwhelmed with the taste of the dessert. 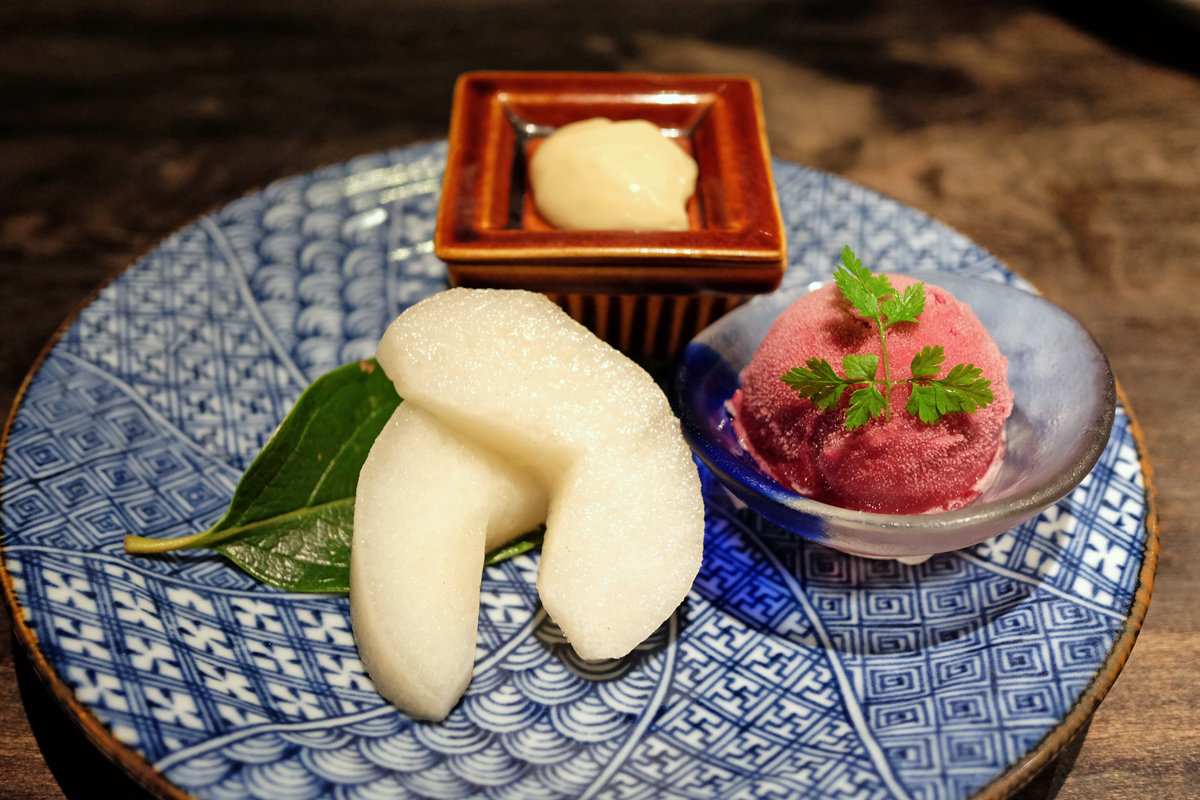 This dinner seemed like a small portion at first but left no room for coffee as soon as we finished the dessert. Japanese fine dining always came in small portion, course by course, few minutes pause for the next course, made you wondering what would come next and kept checking the menu. At the first dishes you’ll be wondering what is next on the menu. At the sixth dish you’ll be asking is it finished yet. These dishes had finished but the taste lingered quiet. It was great dinner.

What is your favourite autumnal dishes?