A Guide to Qutub Minar : Delhi’s Must See Place 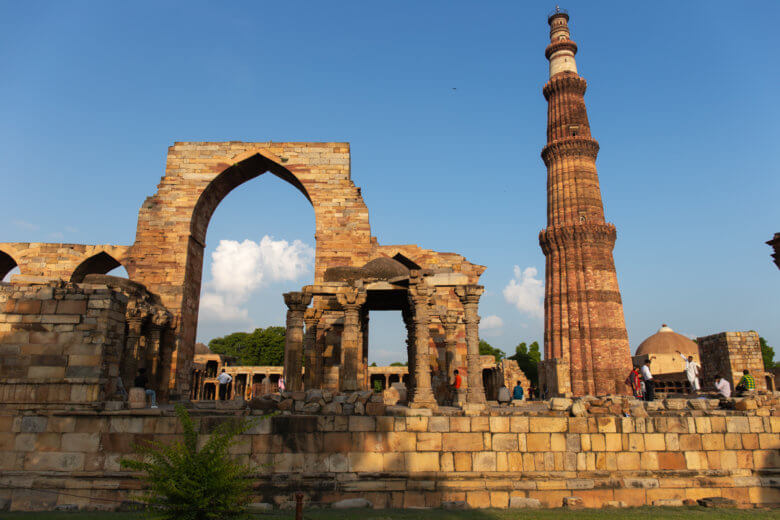 “Qutub Minar is listed as UNESCO World Heritage Site in 1993 for its historical importance and remarkable architecture. It’s known for its tapering minaret, height of 73 metres, with a base diameter of 14.3 metres that narrows down to 2.7 metres at the top. The minaret also has a spiral staircase of 370 steps. There are some other historically important structures surrounding the minaret that form the entire complex.

It took several rulers of Delhi to construct the Qutb Minar. The first construction / ground storey was built over the ruin of Hindu and Jain temples around 1192 by the founder of Delhi Sultanate, Qutb ud Din Aibak. The Qutb Minar is named after him. In 1220, his successor and son in law Shamsuddin Iltutmish completed three more stories. In 1369, the top storey was destroyed by the lightning.

The next Sultan, Firoz Shah Tughlag replaced the damaged storey and added one more. In 1505, an earthquake damaged the minaret, and the next sultan, Sikander Lodi repaired the minaret. In 1803, the minaret once again damaged by earthquake. The minaret then renovated by Major Robert Smith of the British Indian Army in 1828. He installed a cupola which later removed.

Parso-Arabic and Nagari inscriptions on the Qutb Minar show the history of its construction.

Aside from its historical important, the Qutub Minar has myriad structures to see:

If you are in Delhi, the Qutub Minar is a must see place. The edifices within the complex are marvelous and the complex is well maintained and clean.

Ticket booth is located on the right side of the complex. There are two lanes, foreigners and locals. It does not take a long time to queue at the foreigners lane.

There’s no ticket but coin that you should keep and use it for exit.

Entrance fee : 600 / foreigner (cash) or 550 by credit card. ; India citizens : 40 rupees or 35 rupees by card. Be alerted card reader sometimes error and it takes a long time to process (we experienced that) ; Children under 15 years old is free.

The Qutub Minar opens everyday, from 7 am to 5 pm

The Qutub Minar is scarce of shade. The heat can be unbearable in certain months after 10 am to 0330 pm. The best time to visit is November to mid of March after 0330 pm or at almost closing time.

If you come in the morning, you’ll be able to avoid the heat but you’ll lose the sun illuminates the minaret and its nearby structure.

Items To Bring and Not To Bring

These items are not allowed inside the Qutub Minar