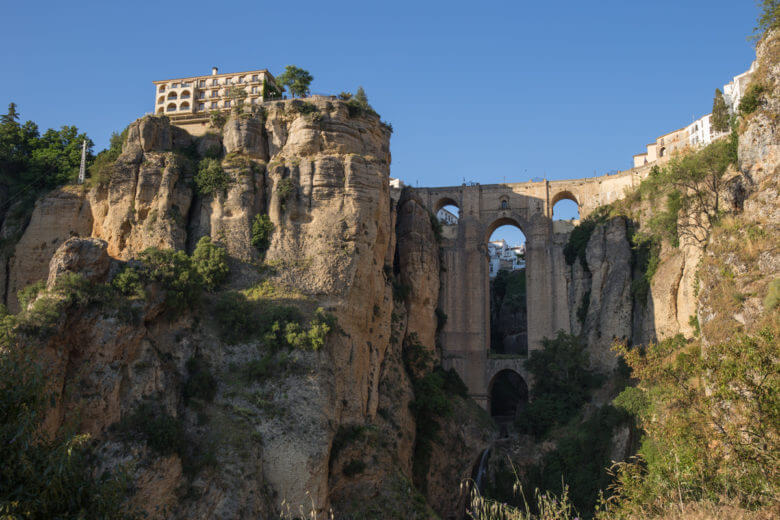 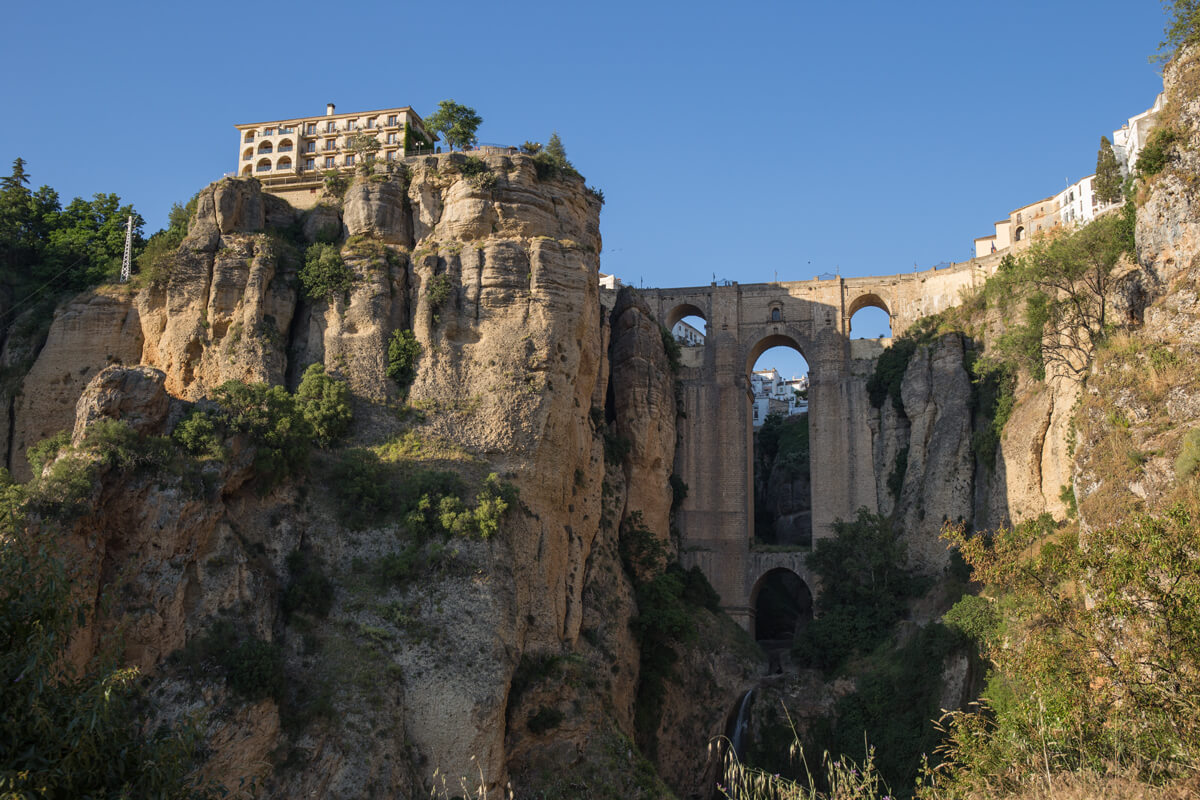 Of all places we want to visit in Spain, Ronda is on top of the list. We have been hearing so many stories of Ronda before we left Japan. We too had seen pictures of Ronda from many articles on the most visited places in Andalucia. Because of our baby, somehow we were reluctant going to Ronda until she grew a little bit bigger and familiar with travelling. After taking many flights, riding trains and travelling by car, we finally took Hanna to Ronda before she reached one year old.

The roads to Ronda from Seville were not as curvy as we initially thought. Hanna was fine throughout the trip. Instead of visiting Ronda for a day, we chose to spend the night in Ronda and soaked into the town’s atmosphere in a slow rhythm. Afterall, it was too hot to go around the town in the afternoon.

In peak season, many opt to spend the night turning Ronda into a busy town especially in the morning. On ordinary days, groups of people flock to the town in day time, leave before nightfall then Ronda turns into a quiet town.

Ronda is perched on top of the hill which set in and around a deep gorge spanned by a grandeur bridge. This location blesses Ronda with a spectacular view that differentiate itself from other Andalusian cities. The Romans and the Moors inhibited the town centuries ago leaving their trace of life on major buildings in Ronda. The charm of Ronda is on its hilltop where the Puente Nuevo or the New Bridge is.

Best Area to Stay: any hotel or Airbnb located adjacent to Puente Nuevo. We stayed in an Airbnb home with a balcony overlooking Puente Nuevo. It’s the best location ever in Ronda at decent price. In the morning we woke up to the sound of hot air balloon soaring to the sky.

Best Time to Visit: all year long although like many Andalusian cities summer is blazing hot. Winter is cold (at least for Spain’s standard) especially if you are staying in Airbnb home. Apartments/houses in Andalusia cities are built to cope with the heat instead of the winter chill. The busiest period is within end of August to first week of September when Ronda Festival or Feria Goyesca de Padre Romero is being held.

Going Around: ideally is by walking. There is a taxi pool is located next to the bullring in case you need to take one.

Dining:  there are more than enough restaurants / cafes / bars to choose from the city. Some restaurants start serving the meal at 2pm for lunch and 0845pm for dinner. Spaniards love to enjoy tapas or light meals before that time.  Many restaurants are close at 5 – 7pm and start serving tapas (light meals) before dinner. 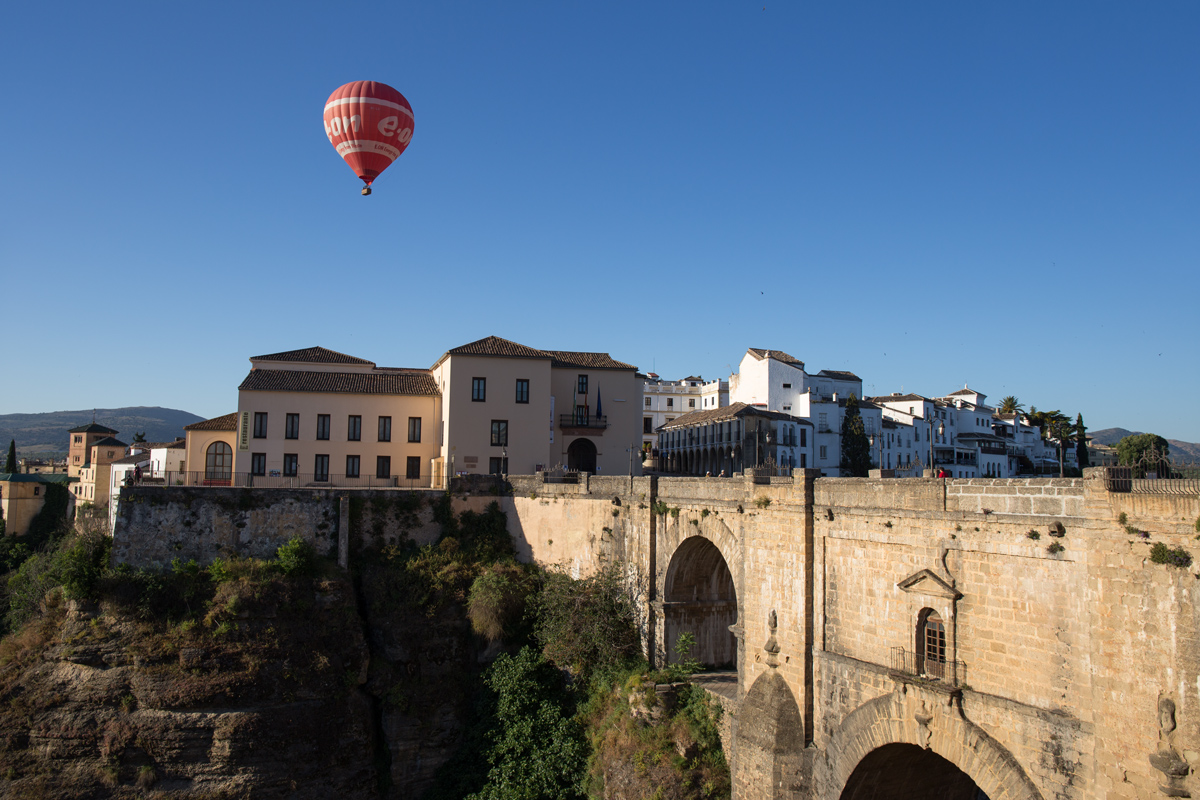 Here are things to see in Ronda:

One of Andalusia’s most famous places is the New Bridge or Puente Nuevo. Puente Nuevo is one of Spain’s largest bridges that spans 120-metre-deep chasm that carries the Guadalquivir river and divides Ronda into three parts: the Little Market (el mercadillo), the Old Moorish Quarter and La Ciudad (the town).

The best spots to take a postcard picture of Puente Nuevo is from the bottom of el Tajo gorge. You can either walk, take a tourist bus or taxi then start a little bit of hike to the nearest point to the Bridge. It’s quite a challenge to walk in summer because of the heat. In rainy days it’s also a bit tough to walk because the road is slippery. Although it’s passable easily, a pair of good walking shoes is mandatory. Skip the walk and take a taxi instead, if you are not accustomed to walk. 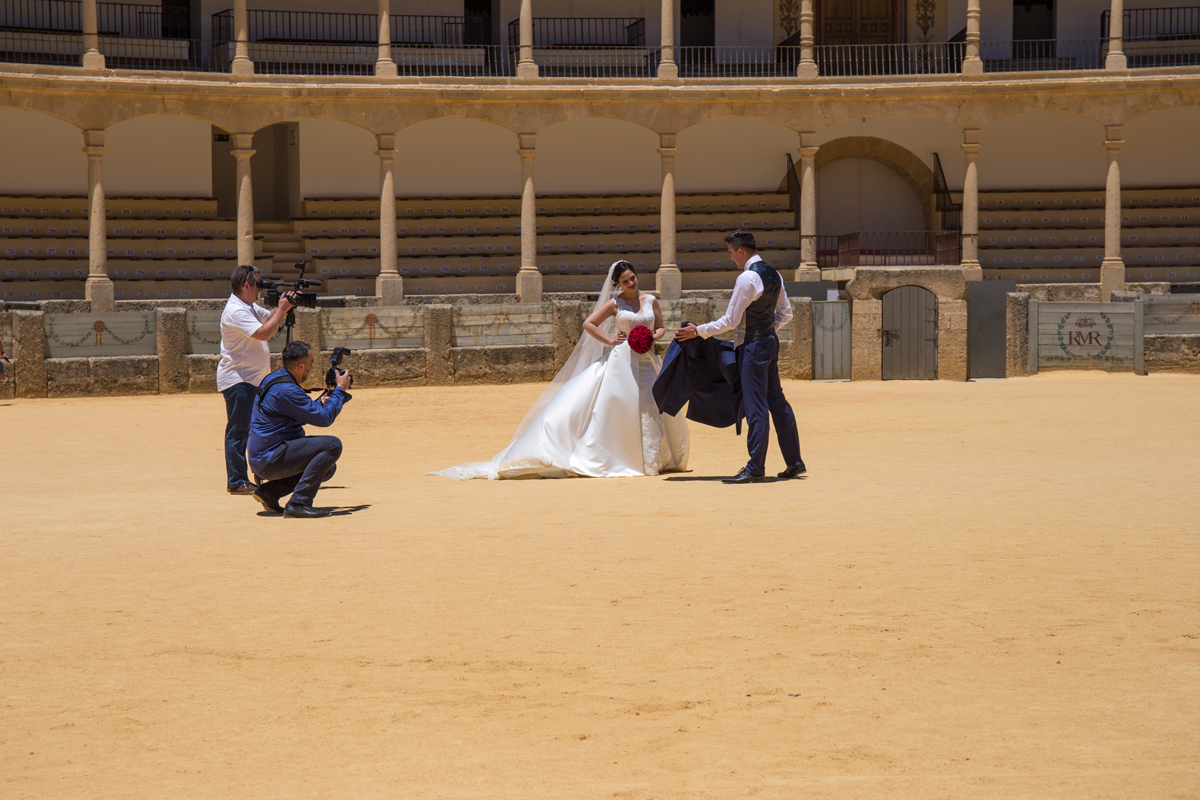 Plaza de Toros is located within the town part of Ronda. This Plaza de Toros is smaller compare the one in Seville. It can only accommodate 5,000 spectacles but ‘rueda’ or the large round circle of sand is the largest in the world. 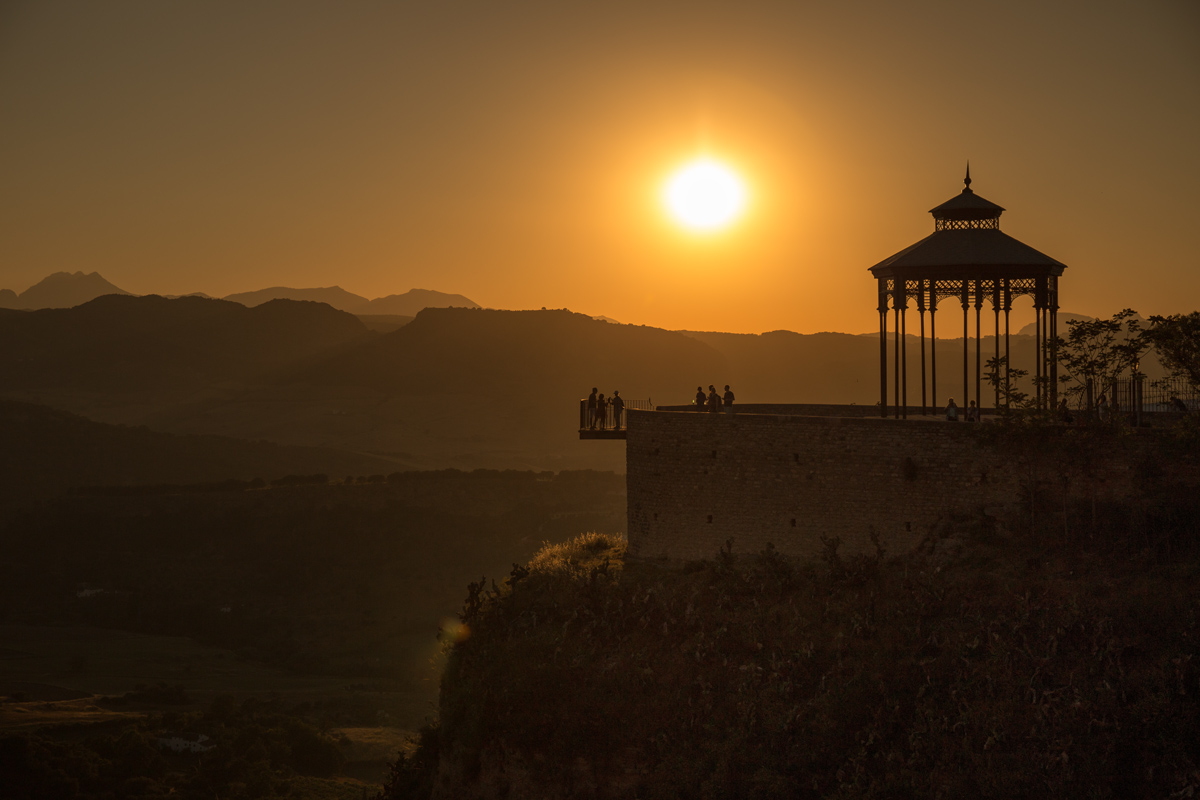 El Balcón del Coño, that what the internet calls this popular viewing deck but the local smiled at us when we said the word and replied “mirador”. It looks like El Balcón del Coño became obsolete. There are some lookout points or mirador close to the New Bridge. The most popular one is the one located close to the Bullring. The shape that extends out the cliff top overlooking the gorge and the stunning sceneries surrounding Ronda what makes mirador popular. While the view from the mirador is indisputably gorgeous, El Balcón del Coño itself turns into a great spectacle before the dusk. 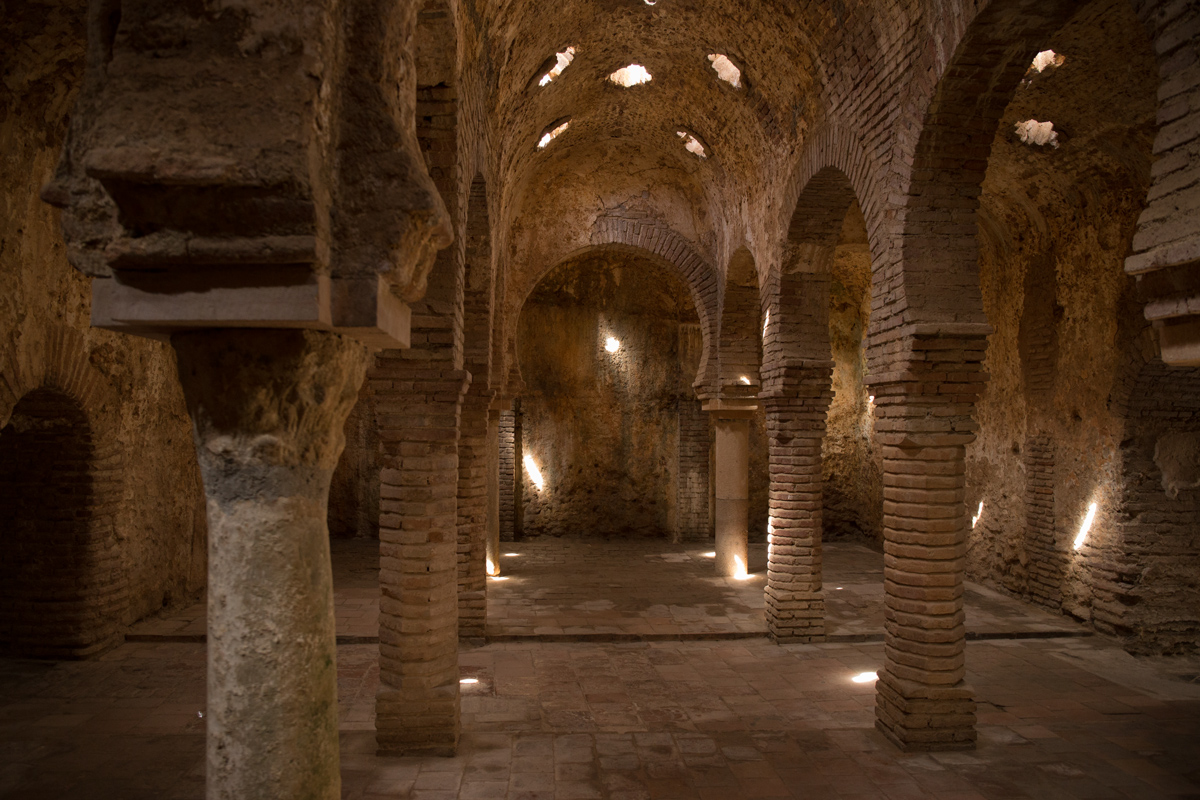 The Arab Bath or Baños Arabes was an important structure during the Moorish period. It’s located outside Puente Arabe (Arab’s Door). It can be reached by walking from the Puente Nuevo. Most of the structures are ruined by the time, only small parts remain but that’s enough to get a glimpse of the bath. There’s small room inside the remaining structure where you can see a short video of the history and how the Arab Bath was like in the past. 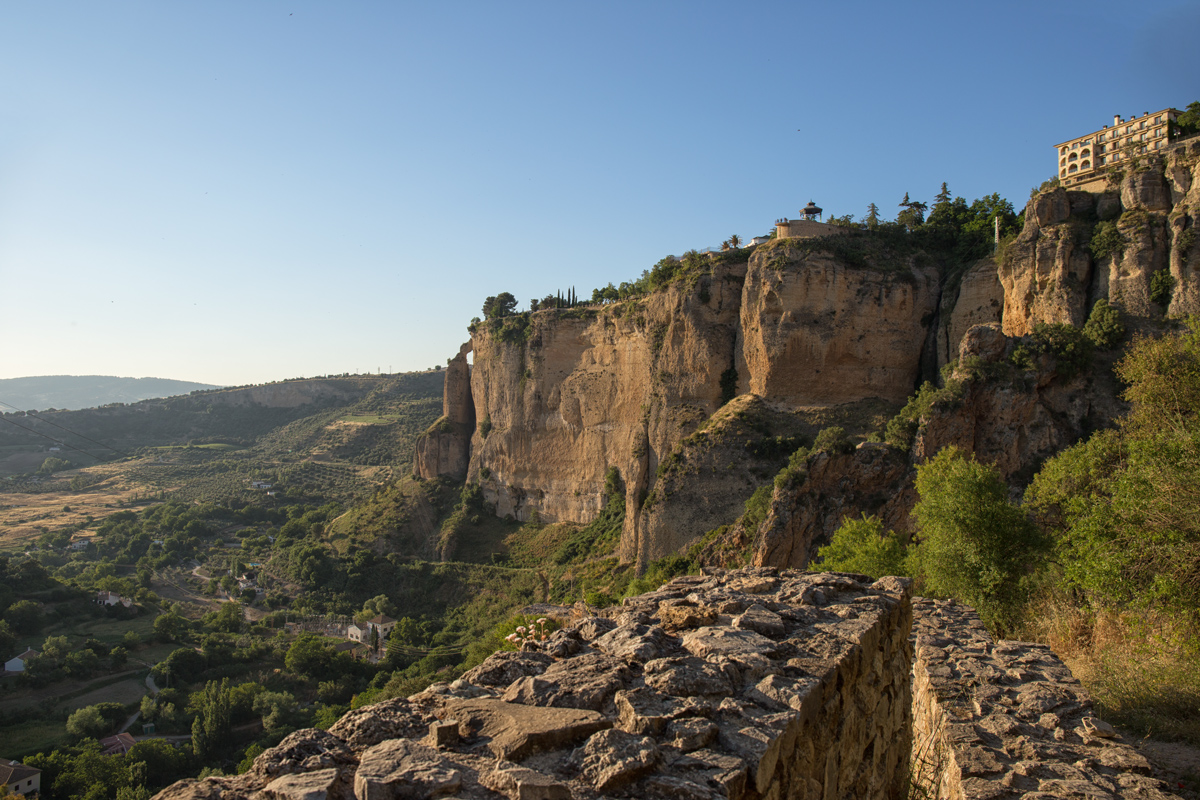 The Arab walls are located at the outer part of the city. Many parts of the walls are no longer exist but we can still see some parts from the bottom of the valley. You can easily spot out the Arab Walls from el Tajo. 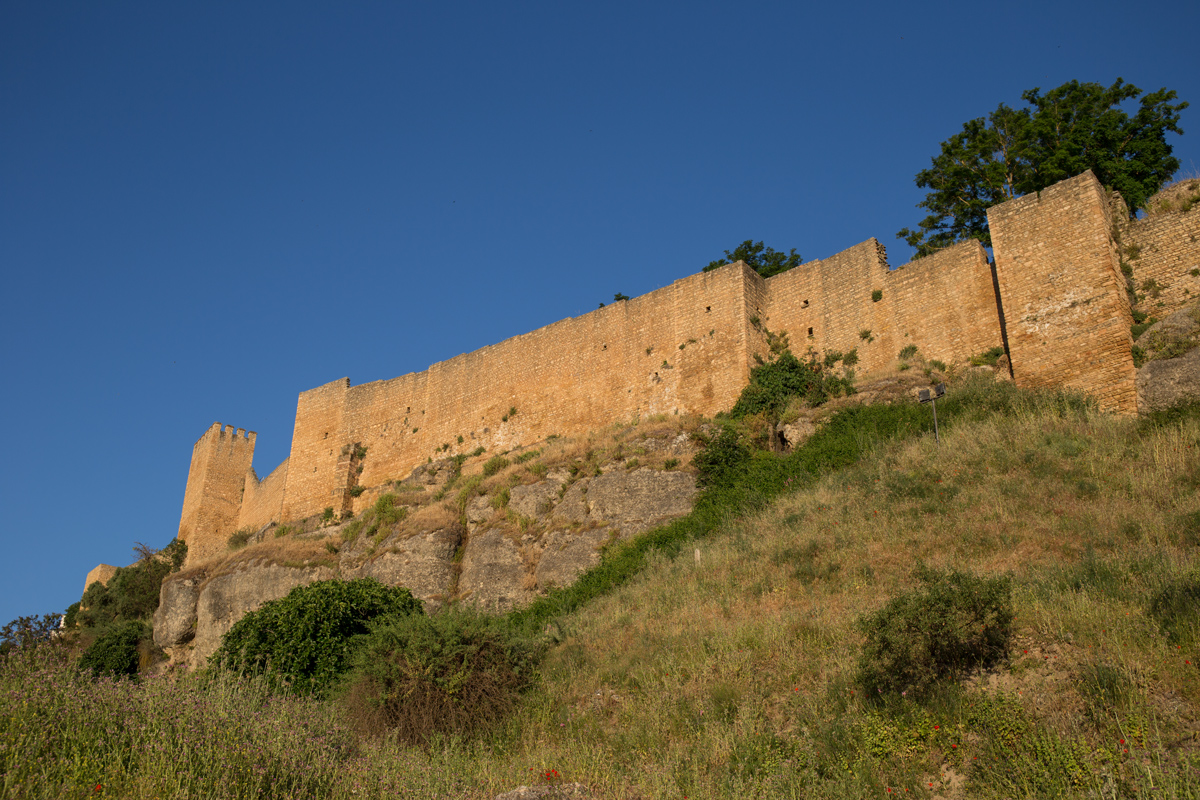 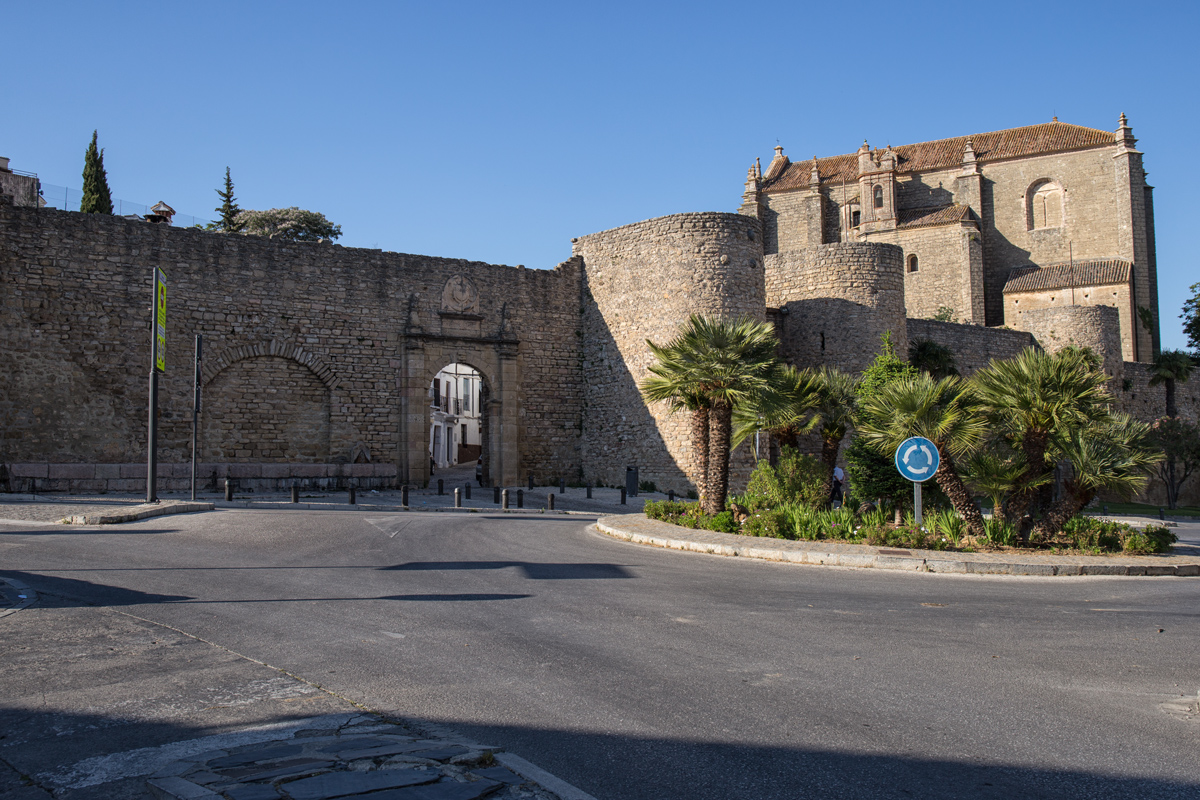 Puente de Almocabar served as a gate to Ronda in the old days. Although some parts are ruined, the southern side of the wall is still in good condition. It takes only 10 to 15 minutes walk from the New Bridge to reach this gate. You will pass this gate if you plan to walk to the bottom of the gorge.