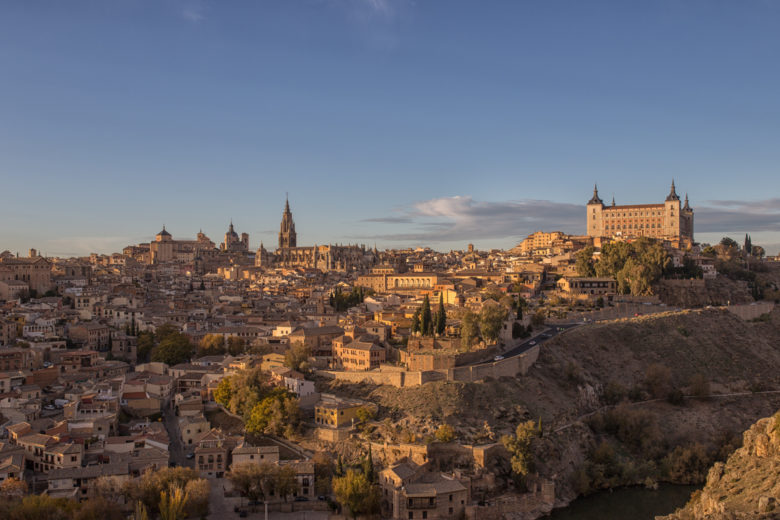 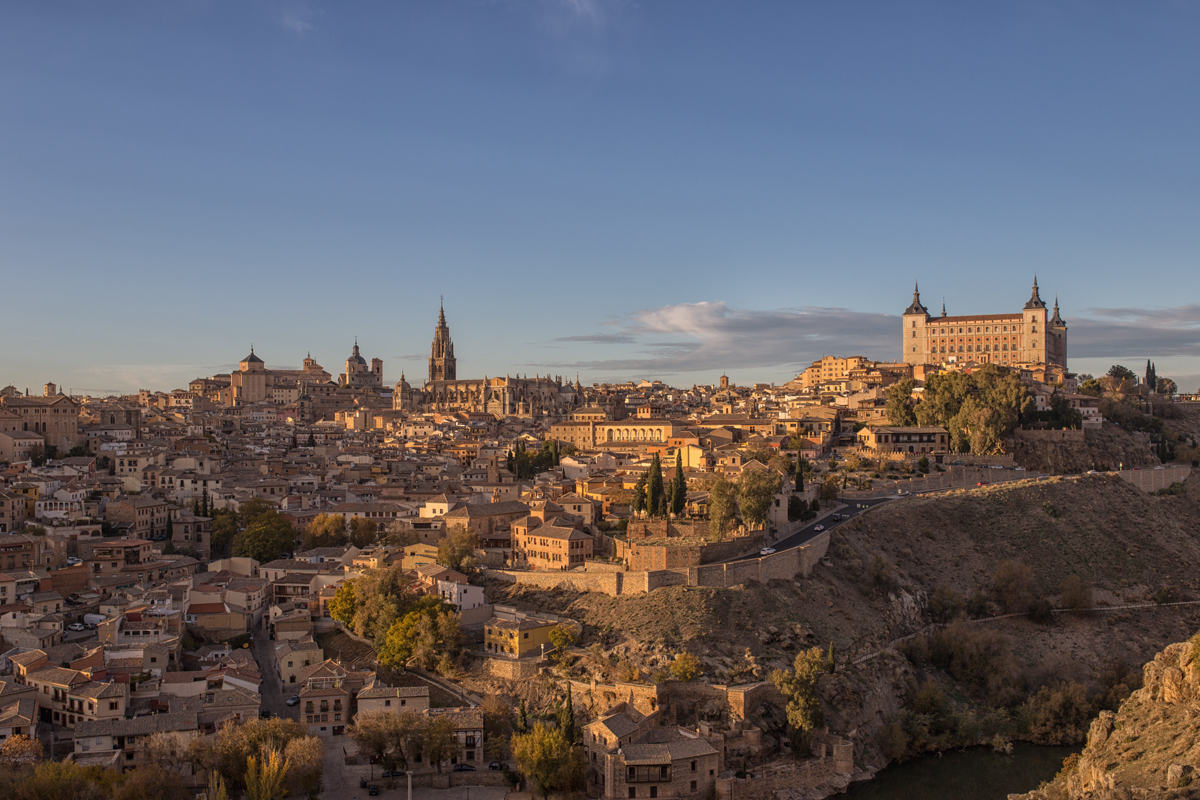 Toledo is a silent witness of three different cultures change, from Roman to Arabs to Jewish. The city is always listed as a must visit city while in Spain.

The description of the city can go on and on but the truth is I did not know much about Toledo before we visited the city. I knew Toledo is one of the must visit places in Spain for its winding streets, cobblestones and stunning architectures. A little knowledge is a dangerous thing, wise men said. My knowledge of Toledo got me into a little bit of argument with Ikumo. “If Spanish ever heard you saying Toledo is just an old city, you would look like just came out from the jungle”, he said. Oh it cannot be that bad I thought. “It is that bad”, he said. “Toledo is probably the most important historical city in entire Spain. The entire old quarter of the city is a World Heritage Site.  We must visit Toledo this time”, he said. So I followed him to Toledo with our 3 months old baby girl. We decided to explore Toledo in 6 hours only and return to Madrid before the temperature got colder.

It took around 30 minutes train ride to Toledo from Madrin Puerta de Atocha train station. I did not even finish breastfeeding Hanna when the train stopped in Toledo. The first thing on my mind when we arrived was to calm Hanna down. She did calm down eventually when we walked out from the train, curious of her surroundings. The clock ticking, we gotta see the best of Toledo in 6 hours. The first thing we did was walked into the information counter but we were the fourth in the queue.

There are three ways to explore the city. One by taxi and stop at Mirador. Two, by Hop On Hop Off bus. Three, by Zocotren (Zoco Train). The easiest way is by taxi, stop at Mirador to view the city then head straight to the city centre. The minus point is we will lose most of view and probably end up spending more money. Taking Zocotren is not an option from the train station because the open window train only operates from/to Plaza Zocodover inside the city centre. So we chose the first option.

Without hesitation we headed straight to Hop-On Hop-Off bus stopping right in front of the train station, paid 36 euro to the staff and started our journey. The good thing about taking Hop-On Hop-Off bus was that we could take as many ride as we wanted. 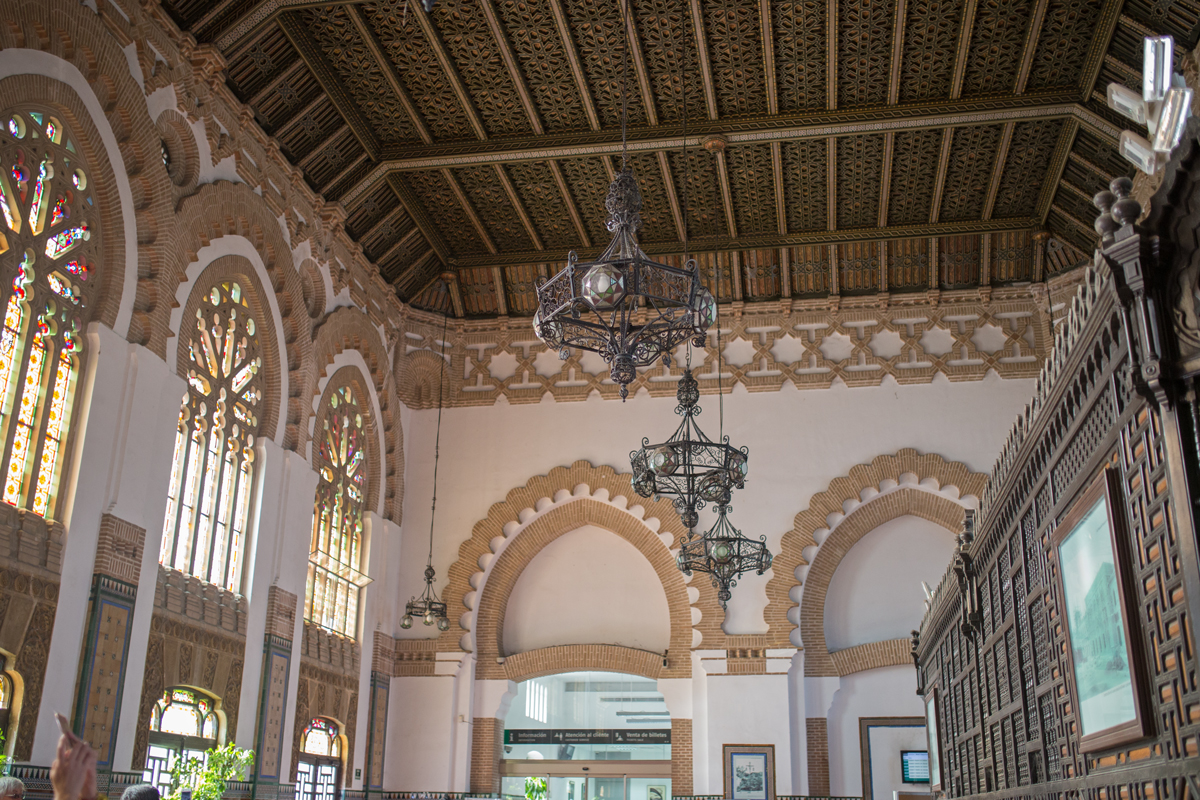 “Take the right side, the view is better”, said Ikumo. He’s that person who always check everything beforehand including the seating. Oh, lucky me. And he was right. The view was much better from the right side of the bus. 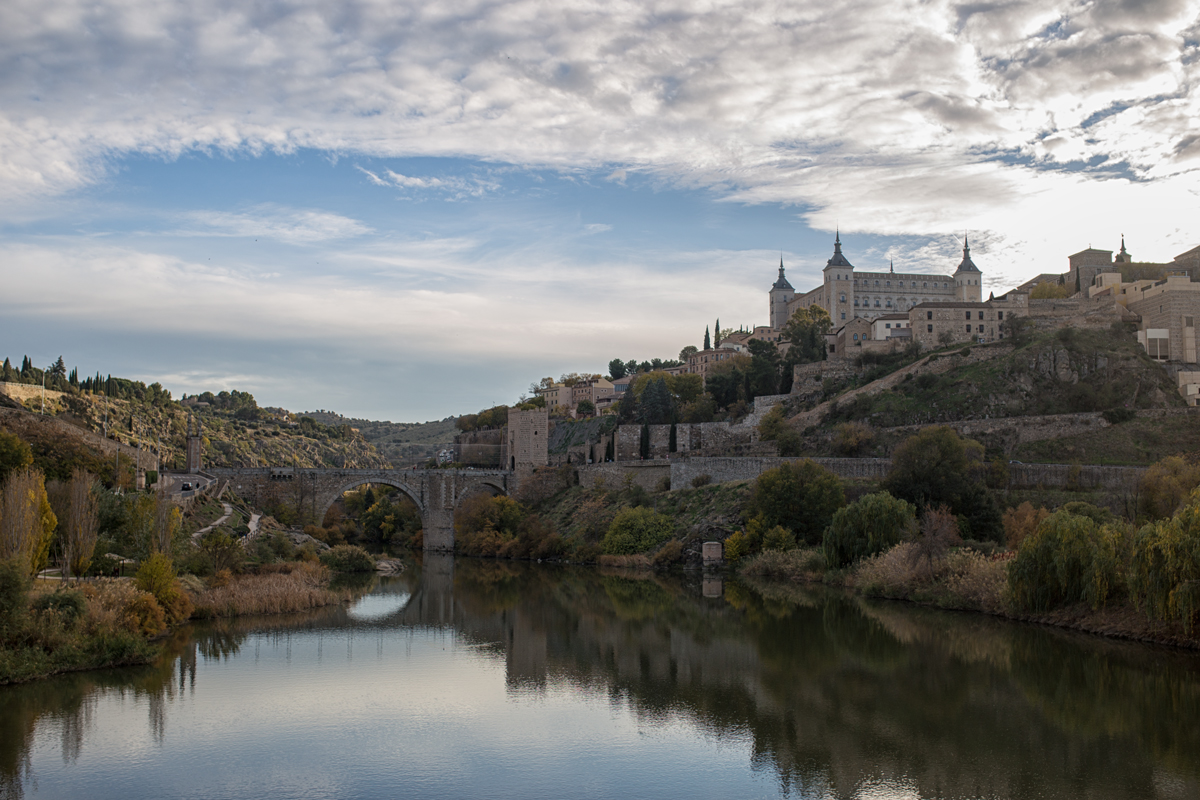 It did not take long for the bus to reach one of the outer gates of Toledo. All of sudden we were presented with a marvelous view of the city. It all makes sense why visiting Toledo is a must while in Spain.

The first important spot was Mirador. It’s a viewing deck to the city. The bus stopped for 5 minutes at Mirador to allow all passengers to snap pictures. We did not get off, took pictures from the upper deck of the bus instead. 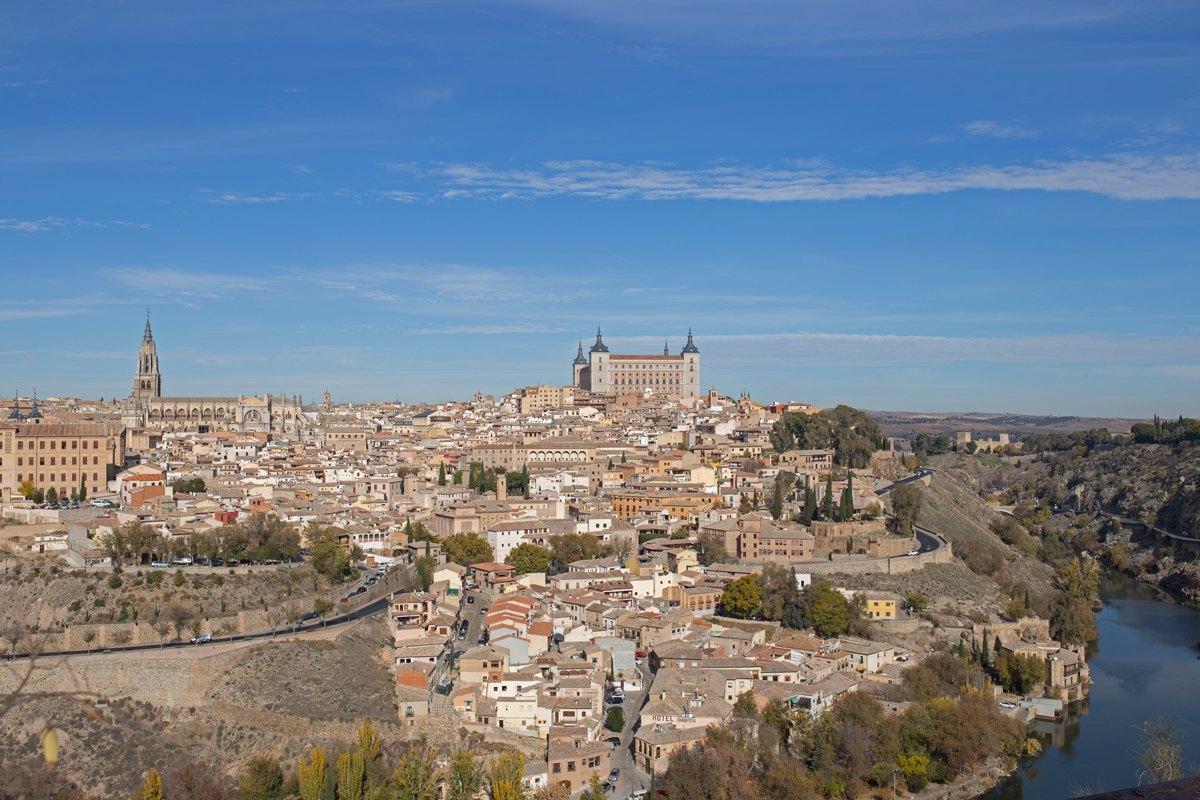 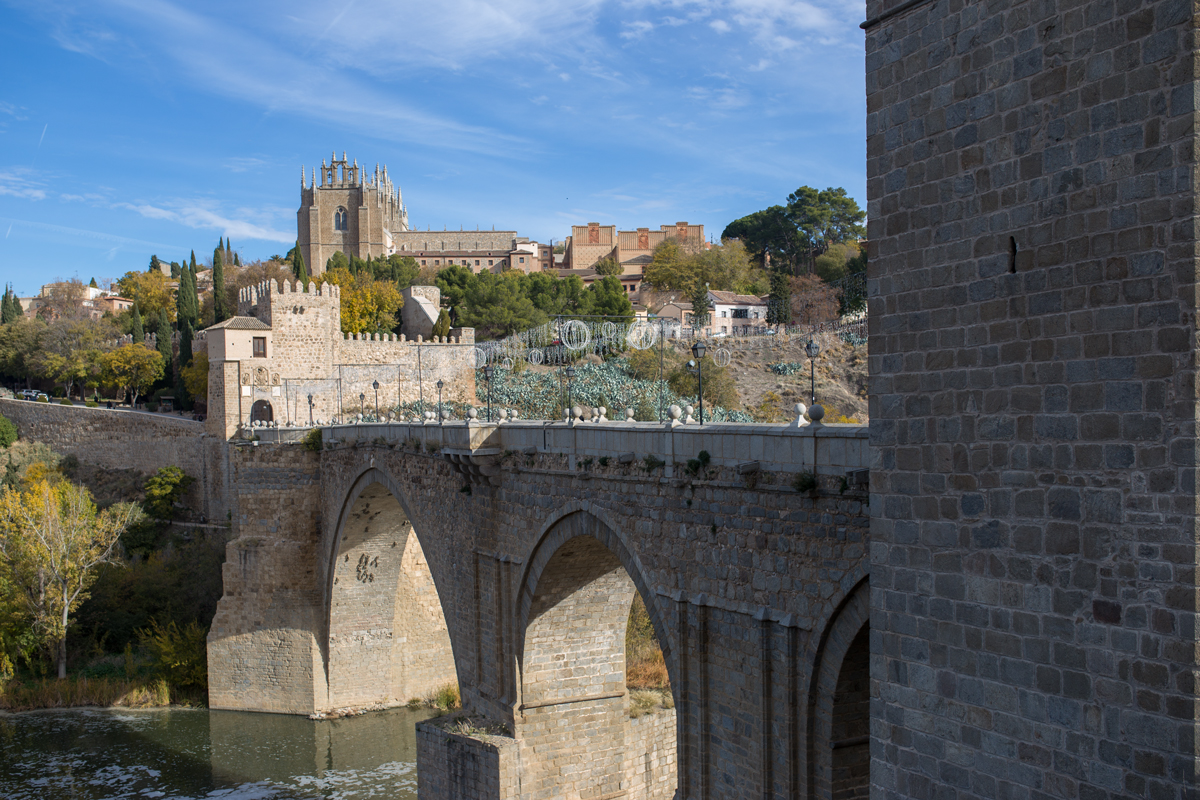 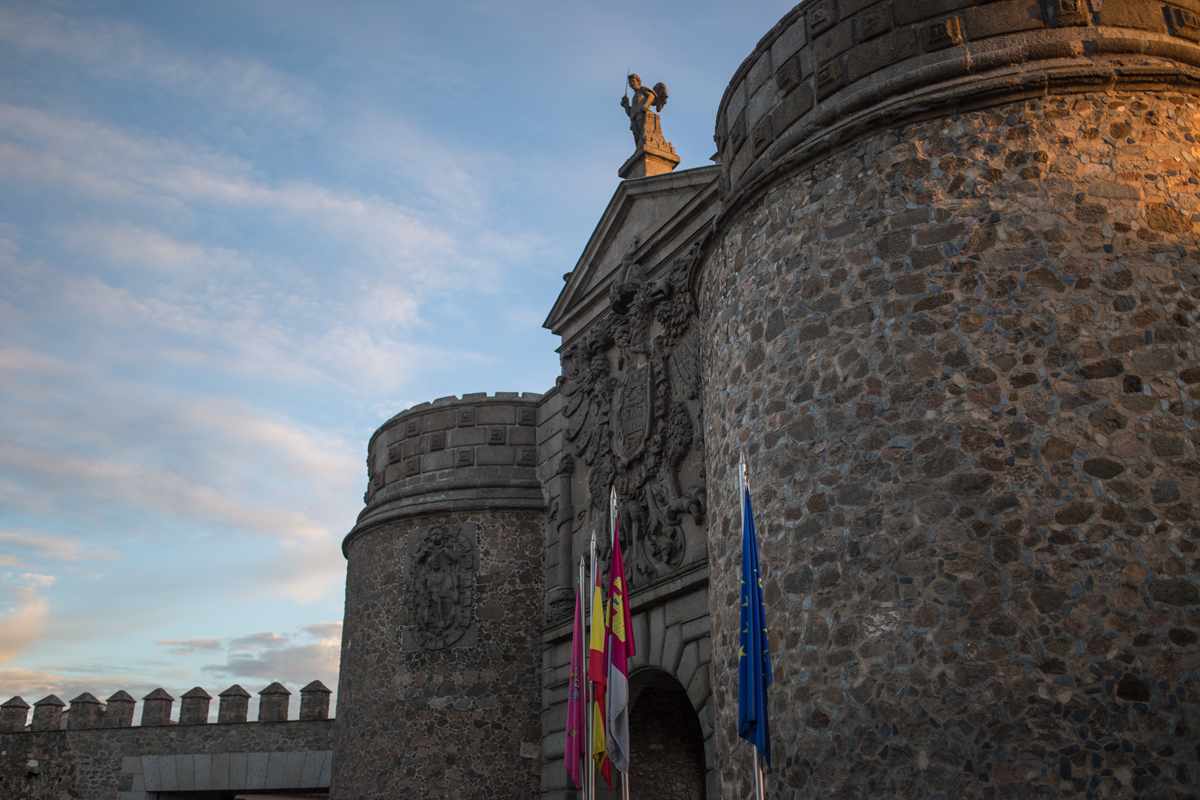 We got off at the last stop of the bus right in front of the Alcazar of Toledo, the highest point of the city. The bus ticket inclusive of free admission to the Alcazar but we chose to skip entering the Alcazar. There were so many things to see in Toledo yet so little time we had. So we started walking down the narrow alleyways. 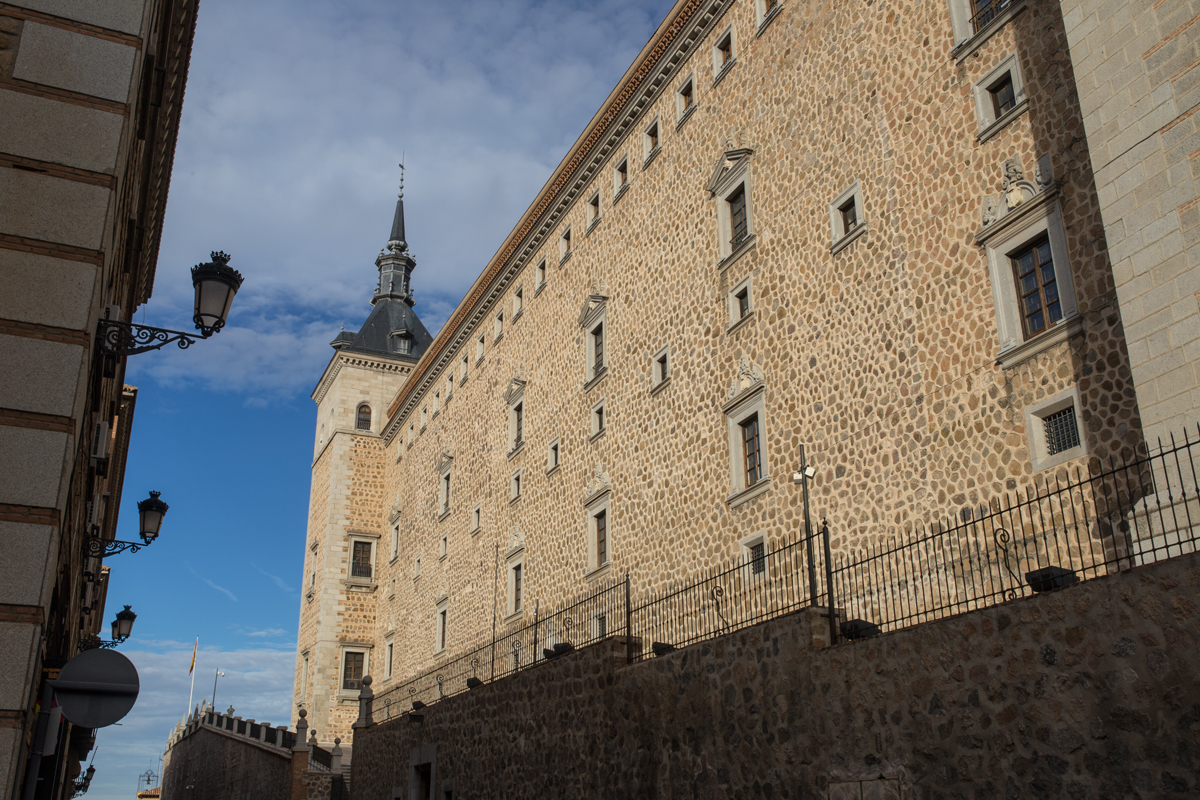 Like many other first time visitors without itinerary in hand we were overwhelmed by the city. Rather than strictly following an itinerary, we let ourselves wandering around and lost in time for awhile.

The first thing to do as soon as we reached the city centre was to feed Hanna again. She had her milk for nearly 30 minutes on the train but it was better to feed her again to keep her happy. There are enough restaurants surrounding the Alcazar, indoor or open door. We chose a restaurant chain that we were familiar with, Lizaran which turned out a good decision. It did not take a long time to feed Hanna before we started walking again. She was quiet the entire walk. Rule of thumb: never travel with a hungry baby for your peace of mind.

The small alleyways were so quiet that we could hear our own footsteps and our voices echoed as we spoke. 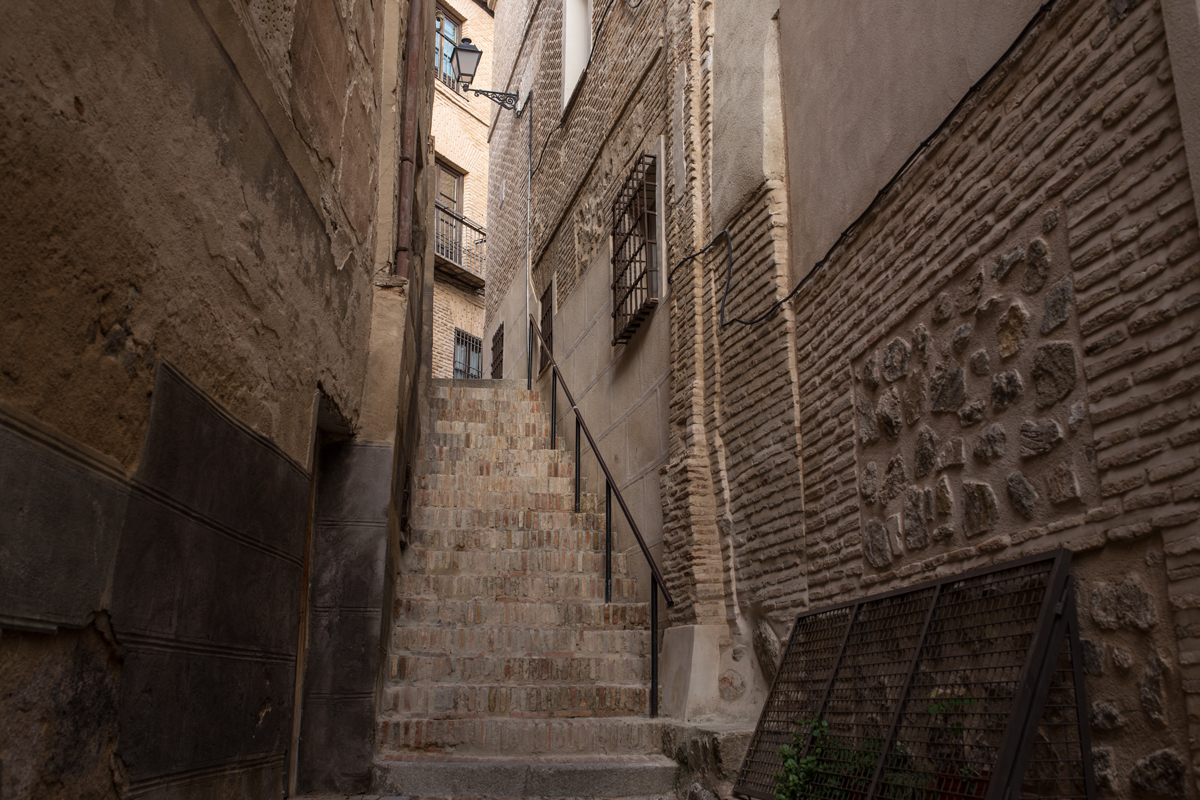 It was a good time to snap some pictures. It was not everyday Toledo this quiet. 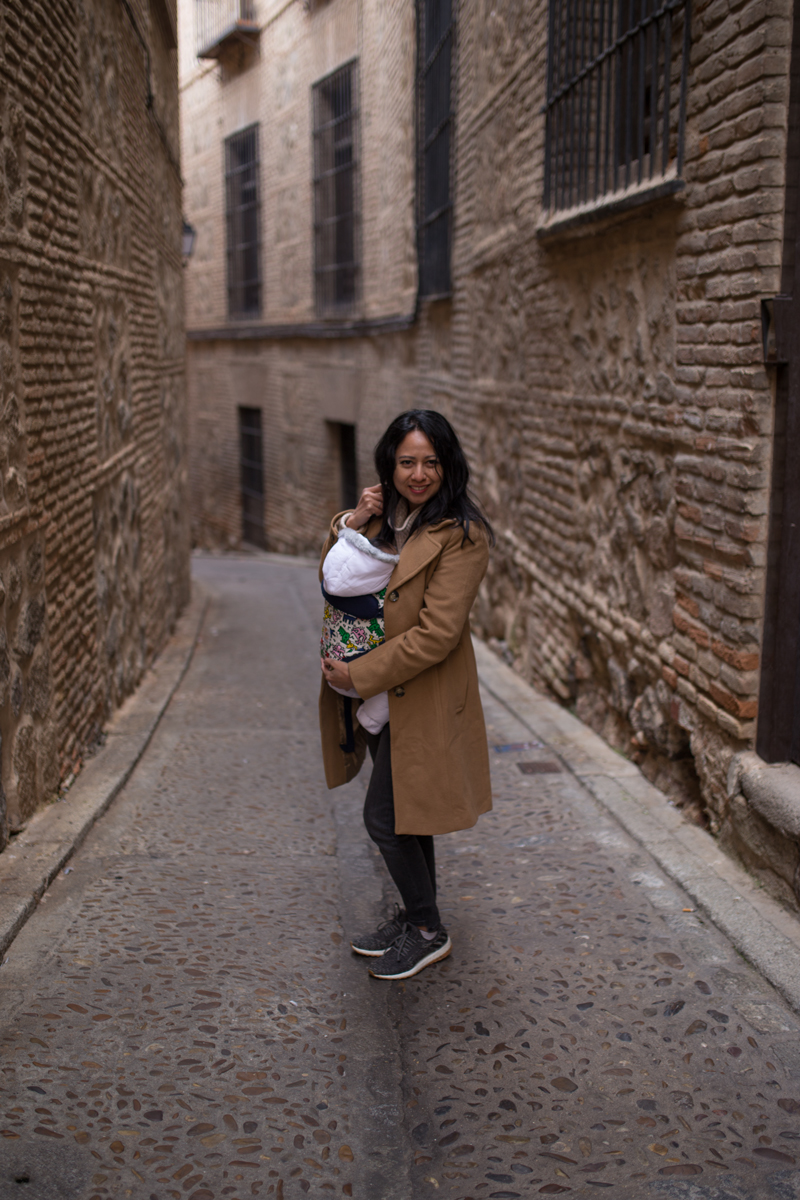 From all recommended places to see in Toledo we chose Iglesia de San IIdefonso Church, also known as Inglesia de Los Jesuitas. Its rooftop offers great view of the city. After paying 2.5 euro entrance ticket, we climbed the stairs to the rooftop. 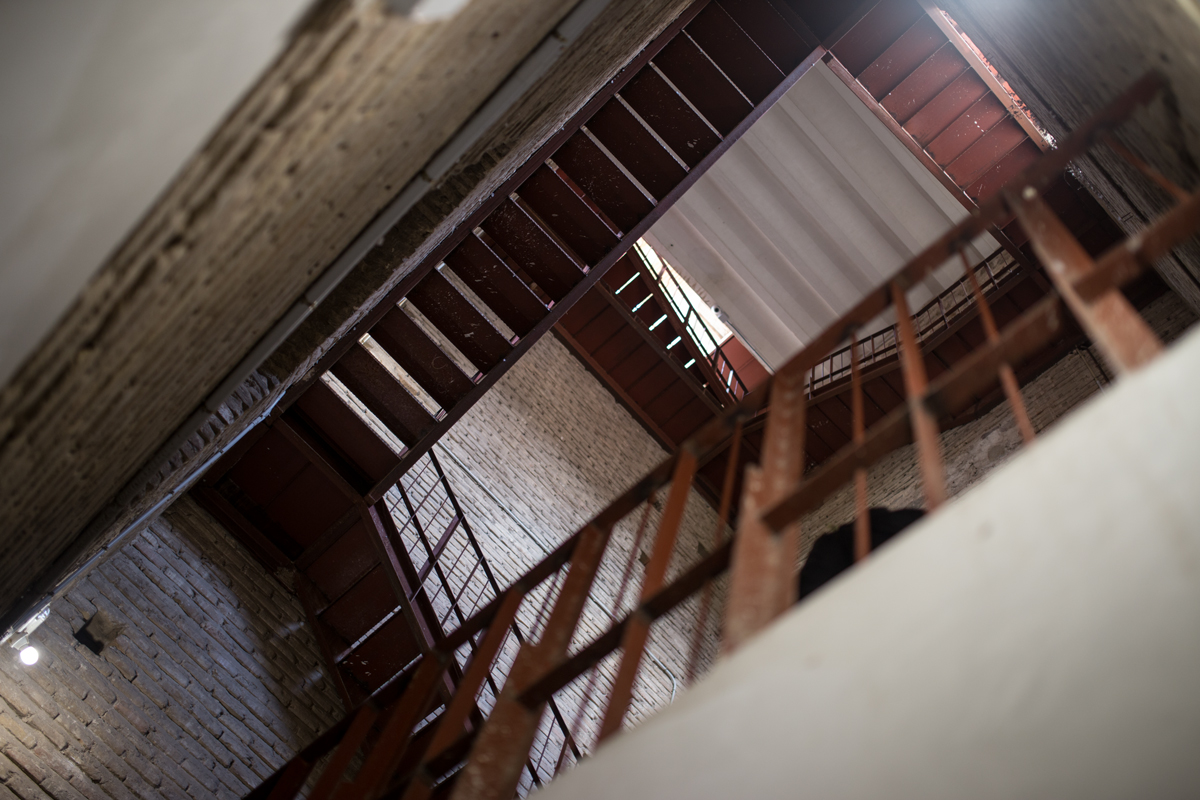 The view did not disappoint us. 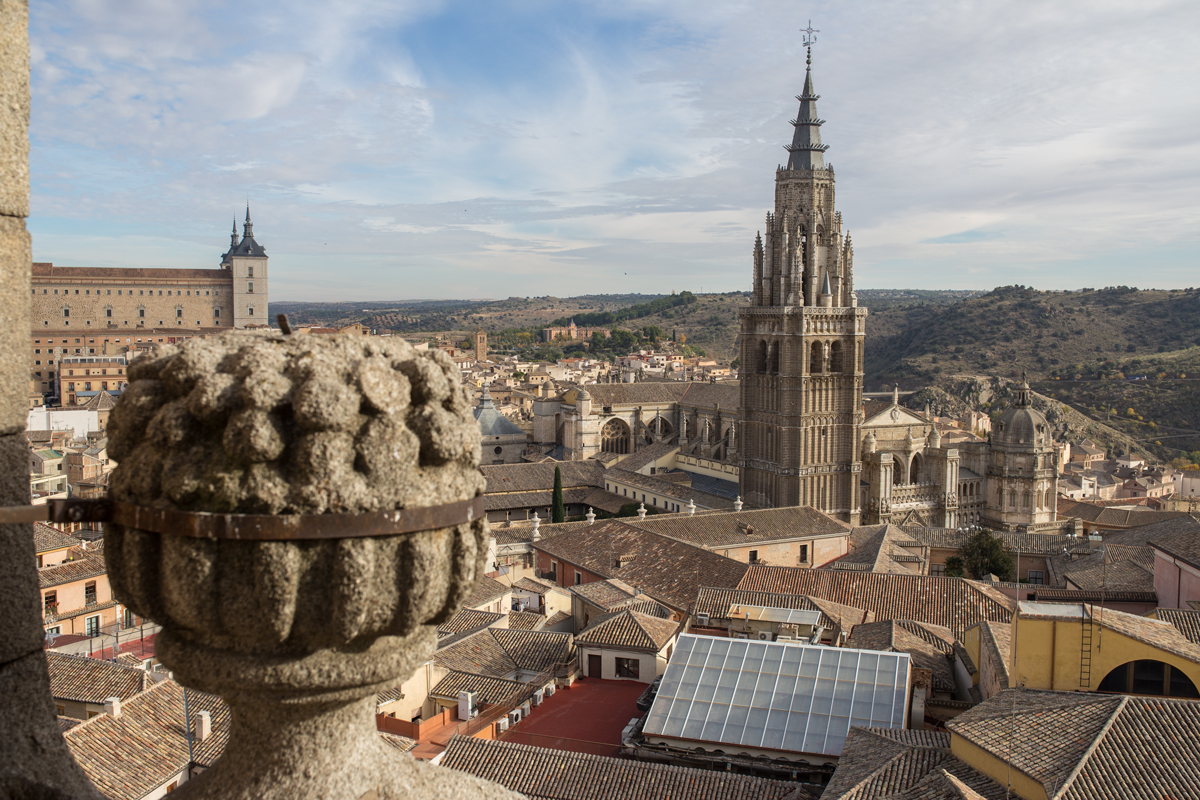 We then headed to the Cathedral. Again, we skipped entering the Cathedral and slowly went back to the Alcazar. 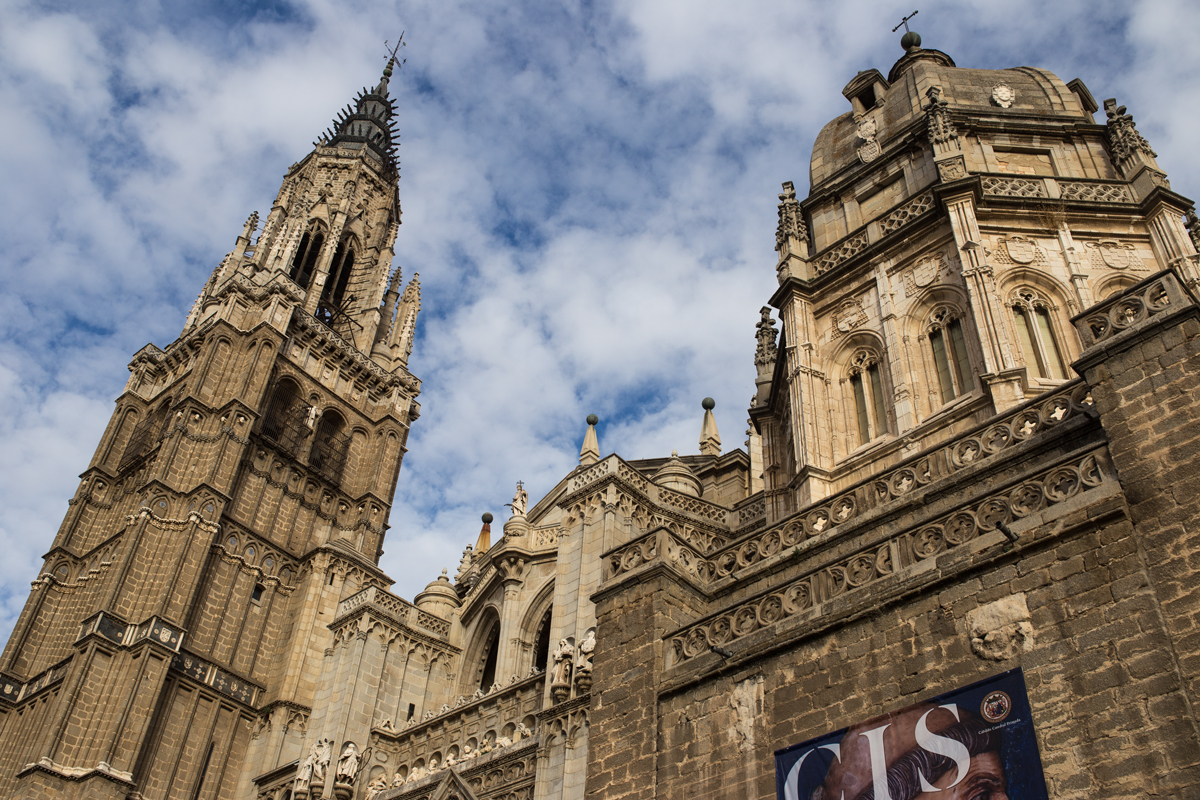 It was a hilly path to the Alcazar, the highest point of the city. Several times we stopped for few seconds than continued walking (rather hiking). Wearing your baby while climbing up the stairs was no joke. This time we got a schedule to keep. We wanted to see the sunset at Mirador.

The bus was just left by the time we arrived at the Alcazar. We had 20 minutes to the next bus. A coffee stop in 7C windy afternoon was a good idea. It was time to feed Hanna anyway. The 20 minutes went by, I was still breastfeeding Hanna. So we took another 20 minutes rest in the cafe. If Hanna was still hungry, we would skip the sunset and head straight to the station, we thought. She finished in the next 10 minutes. We had time enough to catch the next bus, just right before the sunset.

The beam of sunlight hit the buildings and turned the city into a magnificent view that hard to forget. Toledo is not for a short trip. 6 hours visit went by so quickly. We wanted to see more but we got to get back to Madrid. Not to disappoint ourselves that much, we started planning our next visit before we even got on the train back to Madrid. Next time we will stay in the city and pretend that we were the residents of the old city of Toledo.

I never thought I was going to type this but “you have not seen Spain if you have not been to Toledo” is indeed true. The medieval city very much represents the cultures change within Spain old days.