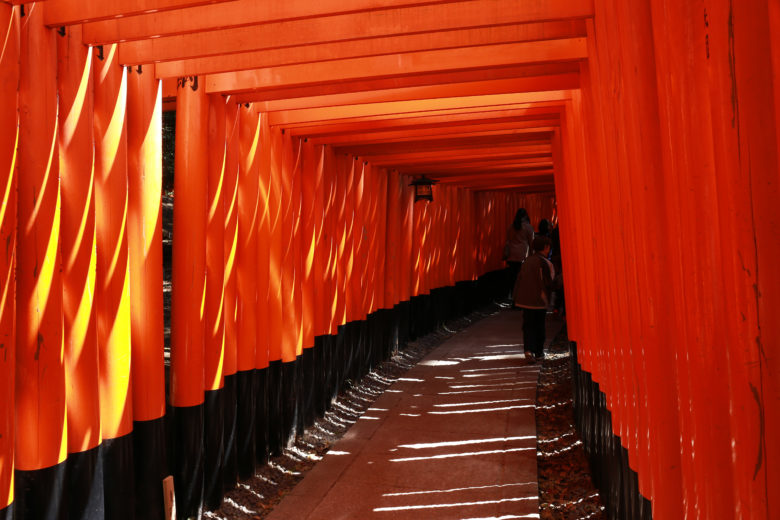 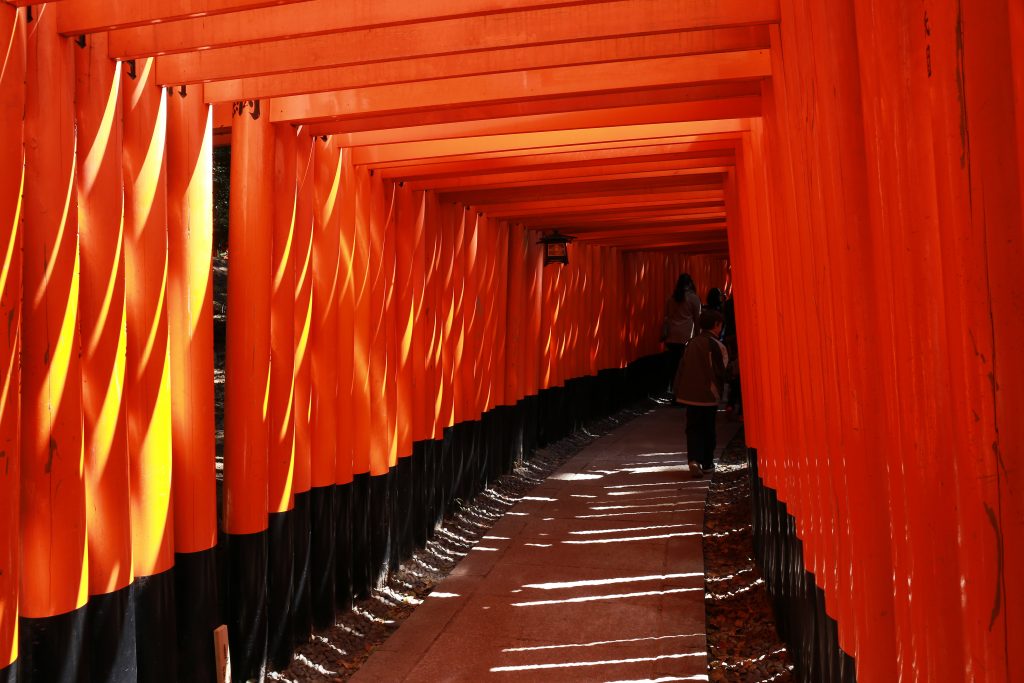 Fushimi Inari shrine is known as a shrine of thousand gates located in Kyoto. TripAdvisor ranks Fushimi Inari as number one tourists attractions in Kyoto.

I first saw the Fushimi Inari shrine in Memoir of Geisha, a movie that was made based on the American best selling novel by Arthur Golden. The Memoir of Geisha is about a life of a retired geisha named “Sayuri” (played by Zhang Ziyi), her survival in life and love story with “the Chairman” (played by Ken Watanabe). The Fushimi Inari shrine appeared in the scene while Sayuri and Chairman strolled along the gates of the shrine. The Fushimi Inari shrine stayed in my mind ever since I watched that movie. At that time, I had never thought that I would be staying in Japan. Today, I am in Kyoto and will visit the shrine.

We went to Fushimi Inari before 9 am taking Keihan line, getting off at the Fushimi Inari station. The station looked quiet, which made us happy, we thought if the station was quiet the famous spot would be quiet too. How naive we were. 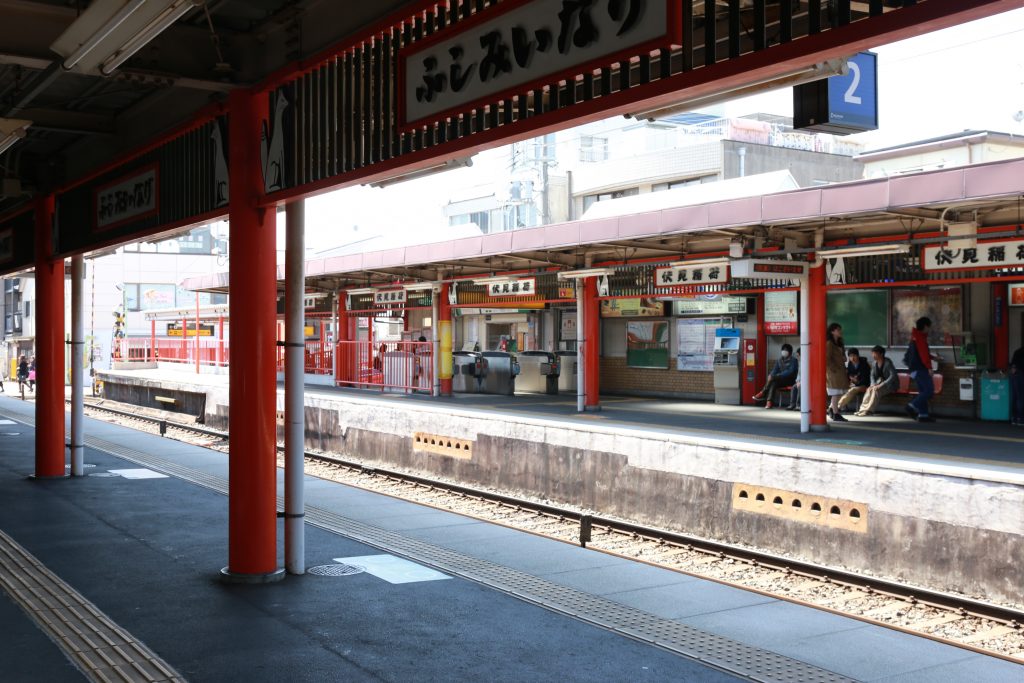 9 am was not early to beat the crowd.  The shrine was already crowded when we arrived there. Tourists (such as ourselves) were interested in taking pictures of the gates that span along the hill, while many Japanese were more interested in praying.

The Fushimi Inari is the largest shrine and also serves as the principal of all shrines in Kyoto. Praying in this shrine is believed to bring good fortune for business. That explained groups of men in suit praying in the shrine when we were there.

The praying spot is located at the main shrine, behind  behind the giant tori gate. 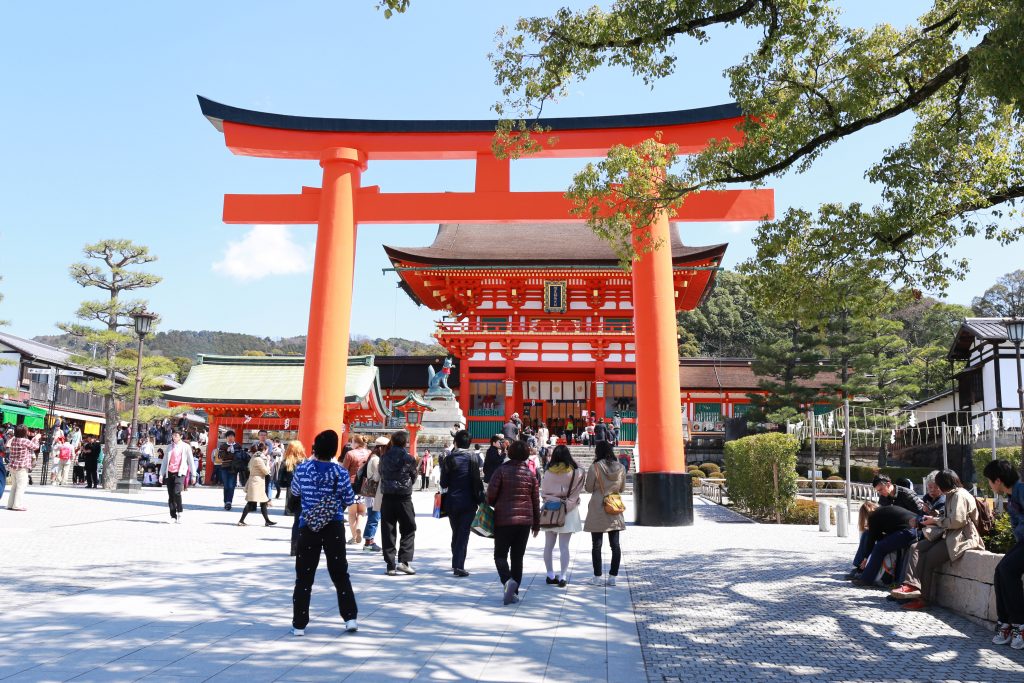 There are fox statues on both sides of the stairs. These fox statues resembling guardian dog or “kaimanu”. The foxes embody messages from the Inari god. 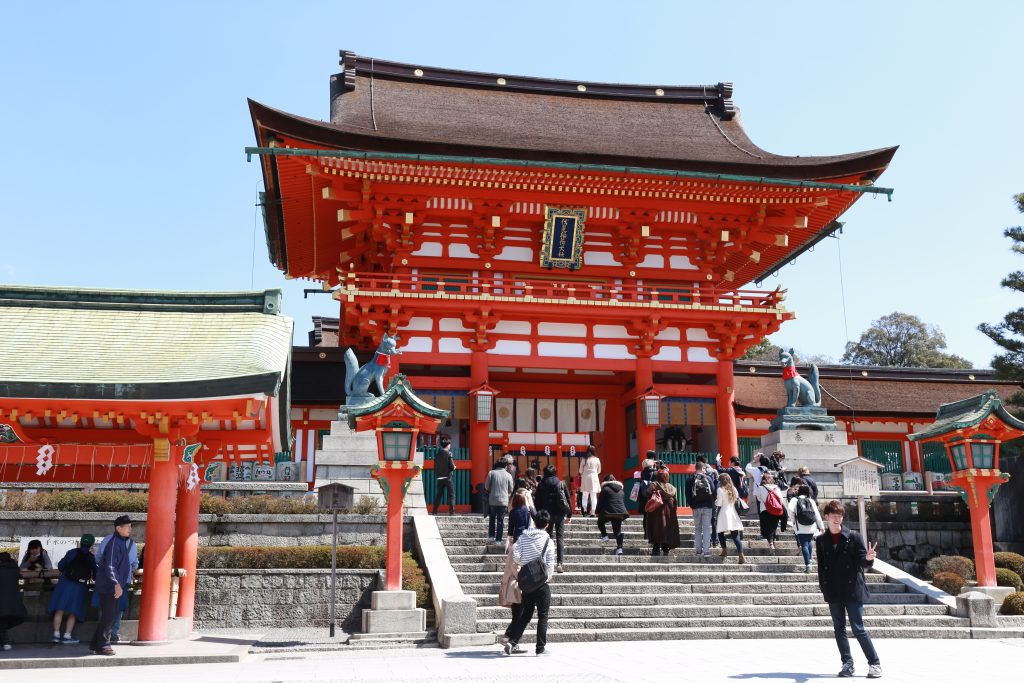 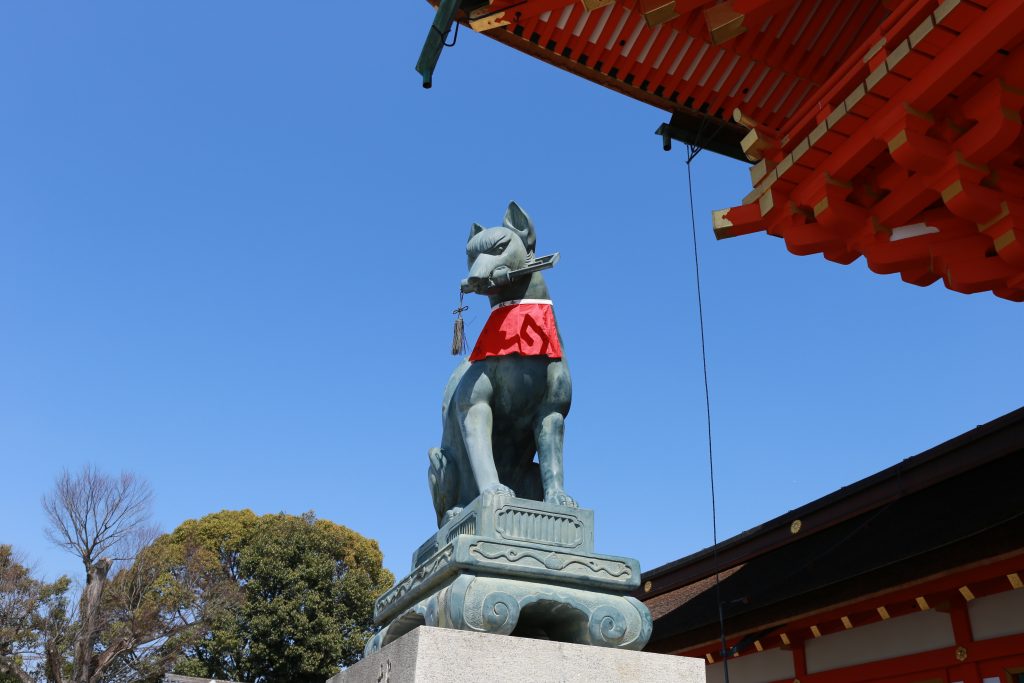 After the main shrine, we took 5 minutes walk to the thousand gates.

The gates lining up the hill resembling wonderful picturesque of the shrine. The gate is one of the main reasons for visiting the shrine. Other reasons are hiking and pictures taking (who wouldn’t like taking pictures of vibrant colour of thousand gates). It’s no entrance ticket, free of charge. 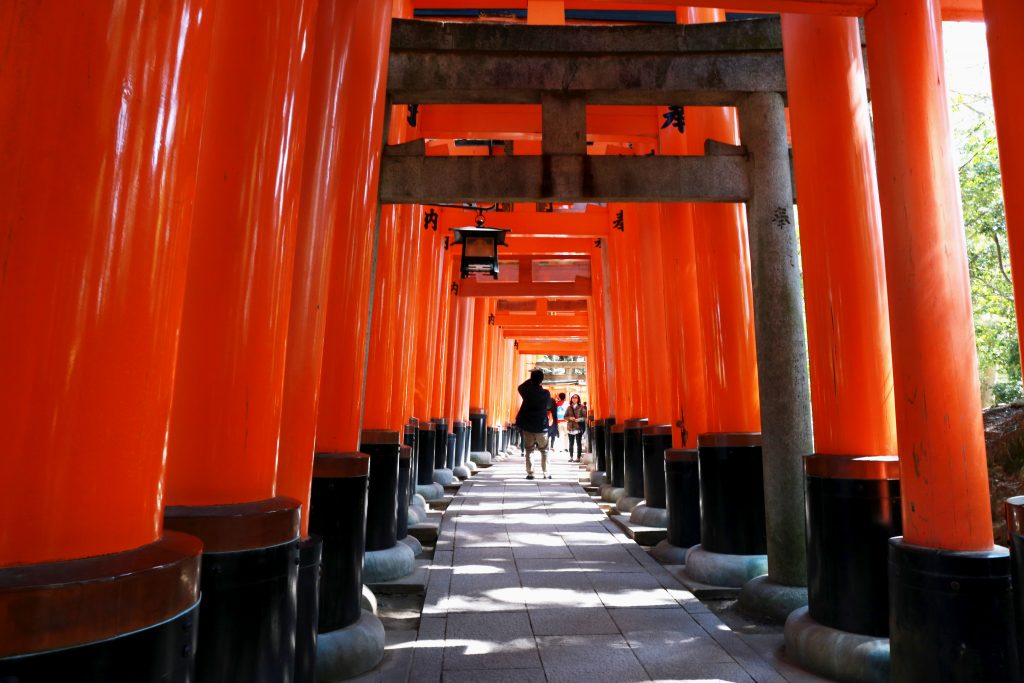 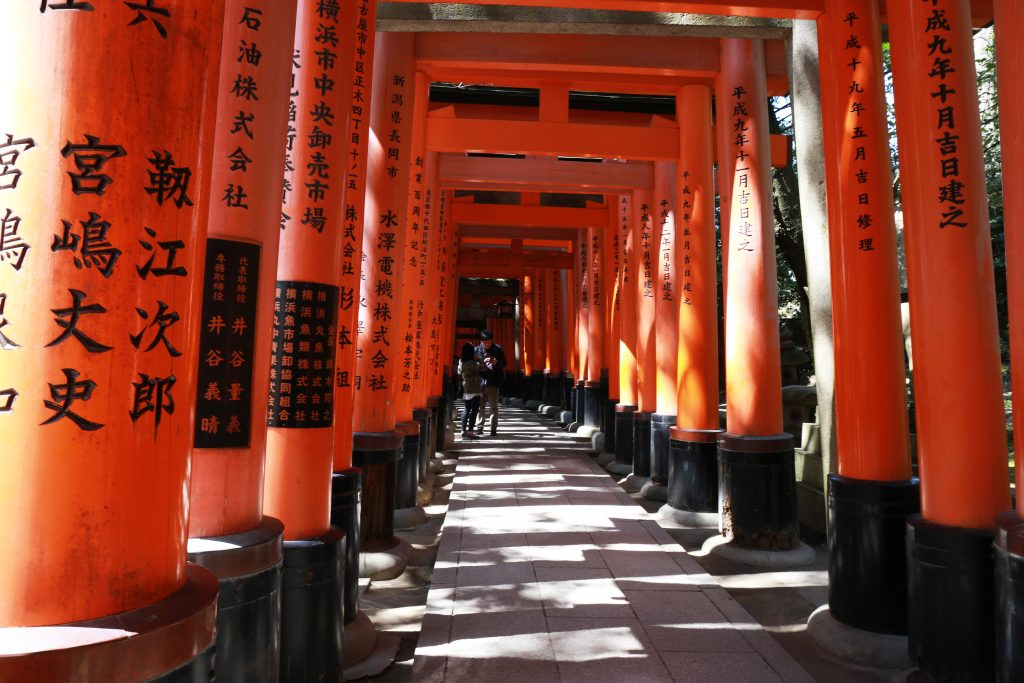 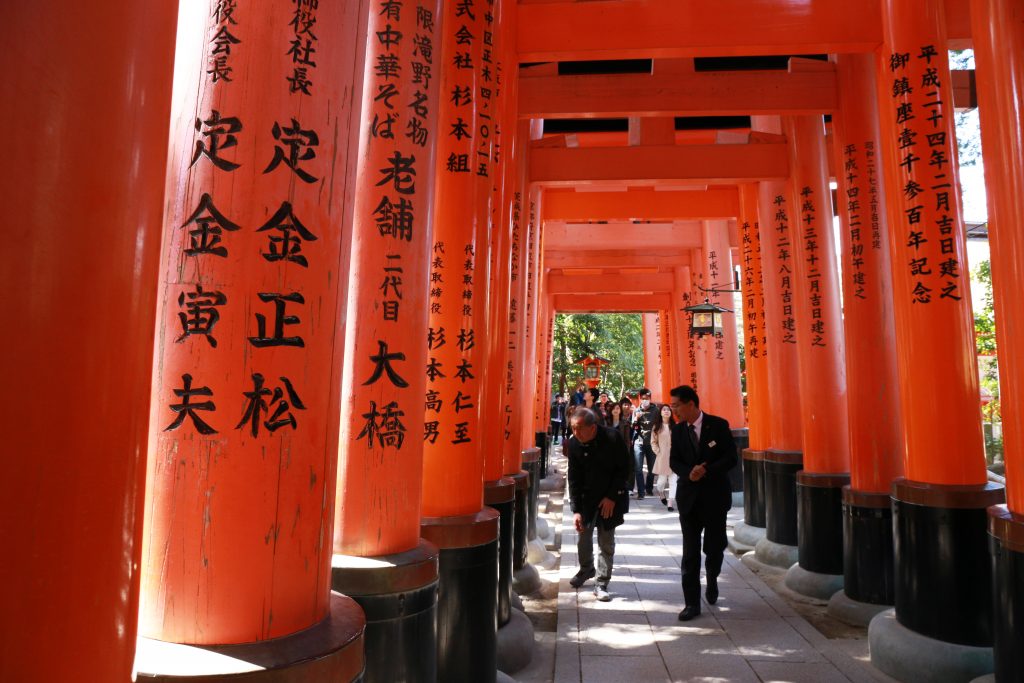 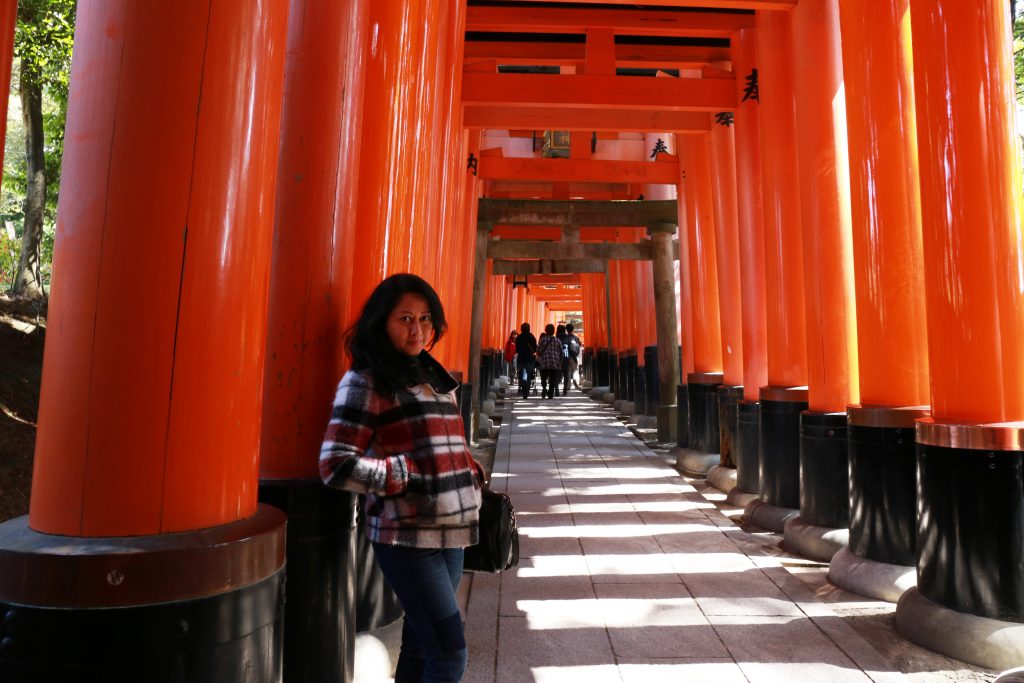 The shrine was crowded but people did not gather at only one spot. They walked around the area as soon as finishing taking pictures. So, there was a plenty of chance to take pictures as long as we were willing to wait.